Depeche Mode at 3Arena: Everything you need to know

From stage times to ticket availability, here's our guide to the band's 3Arena one-night stand 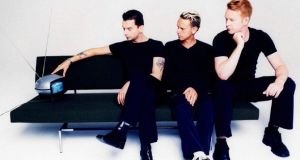 This week, slip into the DMs.

No one would blame Depeche Mode for slinking off into the twilight and enjoying a well-earned hiatus. Grabbing hands have been mauling them for almost four decades and after all the debauchery and holidaying at death’s door, there’s not a pop fan alive who’d begrudge the brooding Basildon blokes a gentle retirement by the sea-side. Who wouldn’t want to visit a Martin Gore-run tea-shop?

The Gore Teacake Emporium may never actually come to fruition though as down time or relaxation don’t appear to be in the Depeche Mode handbook. By now they are a well-oiled chrome machine: half-band, half-tunesmith terminators who refuse to clock off from the job of pop. This one-night stand at Dublin’s 3Arena is the beginning of their second trip around Europe in 2017, having straddled half the globe from May to October on their whopping 110-date Global Spirit tour, in support of the Spirit album that was released in March this year.

It may be the band’s 14th album but there’s no curbing of their razor-sharp edges or shying away from the big issues of the day. It would appear that the more mature Depeche Mode get, the more angst-ridden they become, as Spirit is a damning, dismaying look at our current political landscape.

In a world where hardcore fans must witness perma-victim Morrissey morphing into a wheezing Alf Garnett, it’s cheering to see other 1980s survivors baulk at the slow death of conservatism and stay true to their beliefs.

Perhaps it was the idiotic ramblings of neo-Nazi du jour Richard Spencer – who earlier this year claimed he was a “lifelong” Depeche fan and praised the music’s “fascist element” – that makes the album appear more vital and visceral. It’s as if they’re satisfactorily landing a well-aimed punch at the tormentors.

Tracks such as the single Where’s the Revolution?, whose chorus cries out for an end to apathy with Gahan admonishing us all for letting him down, and the cutting Scum spell out their feelings in a furious cloud of distortion and those familiar pitch-black synth sounds.

This is not a band frozen in time. DM are buzzing with life, throwing their stadium-swelling audience a few crafty curveballs in between the mammoth stomach-flipping genius of Enjoy the Silence and the pervalicious perfection of Personal Jesus.

Gahan will still dance like a snake uncoiling itself from a basket. Martin will probably wear some type of expensive bomber jacket. And Fletch may never remove his shades: these are the little things we can rely on in an uncertain, unpredictable world. Take comfort in the triumvirate of pounding electro-pop ready to envelope us with their doom-laden beauty before spitting us back out into the darkness, born anew, spirits replenished.

Are tickets still available?
Standing tickets are very much sold out so forget those dreams of Dave’s excess sweat hitting you in the face. There is a limited amount of seating tickets left, which start at the princely sum of €81.00 but get thee to Ticketmaster pronto.

What time does everything kick off at?
Doors open at 6.30pm for those early birds. Support comes from the unmissable Beijing buzz band re-Tros who will be thrilling the crowd with their sizzling electro-kraut-punk ways from 8pm before Depeche Mode take to the stage at 9pm.

How do I get there?
The 3Arena is pretty well serviced by a myriad of public transport. The most convenient way to get there is to travel by Luas on the Red Line from the city centre, which will leave you directly at the final stop at the 3Arena. Be kind to those non-gig going passengers though, they’ve probably had a hard day working for the man and don’t want to listen to your incisive views on Vince Clarke’s contribution to Speak and Spell.

If you’re travelling by bus, the 151 goes from the City Centre to Castleforbes Road which is the closest stop to the 3Arena, leaving you with a five-minute walk to the venue.

If you have to travel by car be warned that there are traffic restrictions on North Wall Quay and East Wall Road. You can book a regular or disabled car park space in the Point Village car park (€13), which is located right beside 3Arena. Book your parking through ticketmaster.ie. (tickets must be pre-booked to use this car park).

What about security?
Leave the heavy backpacks or oversized handbags at home, you want to be able to sexily swing around to Personal Jesus without battering a fellow fan, don’t you? You will be searched so keep accoutrements to a minimum with A4-size bags being ideal. You can then breeze through security in time to enjoy a few light ales or purchase some overpriced merchandise.

What are they likely to play?
For those who love spoilers and can’t bear the unpredictability of a live performance here’s a setlist from their October 27th gig at the delightfully titled Rogers Place in Edmonton, Canada.

Why I love: Barbara Kingsolver’s The Poisonwood Bible
8