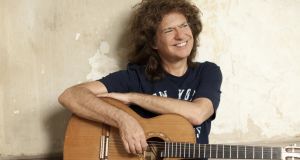 Pat Metheny has defined contemporary jazz guitar playing and there are few younger players untouched by his bright, fluid sound

An Evening with Pat Metheny
NCH, Dublin. 8pm, €75/67.50/57.50/45. nch.ie. Also Tuesday, Waterfront, Belfast. 7.30pm, £53.50/25/15
Pat Metheny says he has been trying to get a gig in Ireland for the last 40 years, but he can’t have been trying all that hard as the clamour to see the great guitarist on his ever visit to this island is likely to be considerable. More than perhaps any other, the Missouri native has defined contemporary jazz guitar playing and there are few younger players untouched by his bright, fluid sound. He brings with him a hugely talented quartet, including rising UK pianist Gwilym Simcock, leading New York bassist Linda May Han Oh, and Mexican drum virtuoso Antonio Sanchez. It’s a group that the guitarist has specifically chosen to cover the entire range of his own material, from the blissed-out groovers of his electric band to the gnarly twists and turns of his recent acoustic work. Fans hoping to hear a few classic PMG numbers may well be in luck, but Metheny is not one for standing still, so expect the great improviser to put new spins on old material.

Wax On: Miles Davis
Workman’s Club, Dublin. 7pm (doors 6.30pm), €10, improvisedmusic.ie
An occasional new vinyl listening club, organised by the Improvised Music Company, drops the needle into the groove for the first time this week. DOI: this couple of hours of music and chat is moderated by myself. As well as a panel of musicians and critics, there’s a chance to hear with fresh ears some of the greatest music of the 20th century, including the iconic Kind of Blue: few recordings are more in need of rescue from the dinner party background than Davis’s magnificent 1959 classic.

Trio Trio Trio Piano Festival
Arthurs, Dublin. 9pm, €17/15. Also Friday and Saturday. Festival pass: €35. jazzontheterrace.com
If Allen Smith didn’t exist, the Dublin jazz scene would have had to invent him. Unofficial godfather of the contemporary scene, the genial architect began promoting concerts as Jazz on the Terrace in the mid 1980s, and it was through his tireless efforts that Dublin began to feature on the touring map for visiting Americans. To celebrate 35 years of tilting at the jazz promotion windmill, Smith has programmed a mouthwatering piano trio series over three nights at Arthurs, featuring – as was always Smith’s preference – visiting and domestic talent on the same stage. Respected American pianist David Berkman is paired with the late-flowering Carole Nelson and her new trio (Thursday). Much-admired British pianist Nikki Iles heads a double bill with the mercurial Johnny Taylor’s trio (Friday). And Belgian keyboardist Ivan Paduart matches up with pianist’s pianist Myles Drennan (Saturday). Get a festival pass and see all three.

Leopoldo Osio & Orlando Molina
Bagots Hutton, Dublin. 7pm, €15. bagotshutton.com
Authenticity is an over-rated virtue – no one really cares as long as the music is good, and if it’s bad, who cares if it’s authentic? – but there’s no doubt that Latin American music usually sounds best in the hands of those who grew up accustomed to it’s particular rhythmic jaunt. Pianist Leopoldo Osio and guitarist Orlando Molina both came from Venezuela to study at Newpark Music Centre, but both have stayed to build careers here, and this new duo is a chance to hear two authentic Latin American jazz musicians exploring the Latin American songbook.

Balloon couldn’t have landed at a more insulting moment
5

WB Yeats, the Spanish flu and an experiment in quarantine
10