The Gloaming announce four Dublin concerts, their only live shows in 2018 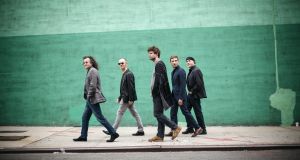 The band will kick off the shows on March 5th, with tickets going on sale on Friday, November 17th. These will be their only shows in the world in 2018.

The NCH has become something of a home for the group. To date they’ve sold out 17 night there, with seven shows in the hall in 2017.

The band are mostly touring other project at the moment. Martin Hayes and and Dennis Cahill are on the road with Doug Wieselman and Liz Knowles as the Martin Hayes Quartet. Iarla O’Lionaird is touring with Eighth Blackbird. Caoimhin O’Raghallaigh is performing with This Is How We Fly. And among the acts who have recently worked with Thomas Bartlett are St Vincent, The National, Sufjan Stevens and Father John Misty.

Love/Hate is returning to RTÉ on Friday nights. Why did we love it so much?
8