Steps at 3Arena: Everything you need to know 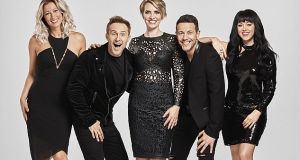 You’d be a fool for thinking that Steps were of a certain time. Sure, their matching pleather suits might have aged a little bit but the simplicity of their dance routines means that 20 years since the release of their debut single 5,6,7,8, which eroticised line dancing and cowboy hats, all five members can still move through the routine with ease. This is a real plus for anyone going to their gig in the 3Arena on November 13th as part of their Party on the Dancefloor Tour.

Ah! 20 years of Steps. 20 years of our good pals H, Claire, Faye, Lee and Lisa. Where does the time go, if not spent wisely relearning all of the choreography for Deeper Shade of Blue, Love’s Got a Hold of my Heart, One for Sorrow or their cover of Tragedy for a moment like this? But despite the shiny exterior of Steps, mostly down to the reflective material their trousers are made out of, it was not an easy road to get from 5,6,7,8 to 2017.

The group broke up in 2001, after four years of chart glory, not because they wanted to end their winning streak on a high but because H and Claire were unhappy in the band, only to go on as a duo.

The other three were fuming and this rage would reveal itself in 2011, during Sky’s Steps Reunion, a documentary-style show that followed the possibility of them ever getting back together.

If the title of the show wasn’t enough of a spoiler, the band did get together but not until they addressed the notions that H and Claire developed during their peak years. “Problems first arose when H started flying in Britney Spears’ private jet while the rest of them travelled by bus,” said Lisa sadly, her big eyes watering at the memory.

In April of this year, Steps released their fifth studio album called Tears on the Dancefloor, where it peaked at number 10 in the Irish album charts and while their songs don’t invade airwaves they way they did before, it proves that there’s still a place in the world for the fun and flamboyance of Steps. And that place, primarily is Eurovision but they’ve yet to achieve that milestone so, for now, that place will have to be the 3Arena. And our hearts, where they will live on forever, of course.

What time does everything kick off?
Doors open at 6.30pm and Max Restaino will kick things off at 7.10pm, with the one and only Vengaboys warming things up (and down) from 7.30pm. Steps are expected on stage at 8.30pm. These times are subject to change.

How do I get there?
There is parking available in the Point Village car park (you can prebook a spot online for €12 through Ticketmaster) but gig goers are encouraged to leave their cars at home and take the red line Luas or use Dublin Bus. The 151 operates every 10 minutes during rush hour and it will drop you on Castleforbes Road, the closest stop to the venue. Due to roadworks, traffic has increased in the area so to save yourself any stress or risk missing the Vengaboys, get the Luas.

What about security?
Bags will be searched upon entry and anything that may be deemed as a weapon – like bottles, cans, selfie sticks, large umbrellas, iPads/tablets, video cameras, professional cameras (lens 35mm or more), audio recording devices, Go-Pro, large posters (A3+), large flags on poles, belt chains, laser pointers – are prohibited. So pack light to keep the wait in line as short as possible.

What are they likely to play?
Oh! All of the hits. And they’re all hits, equally so. The Dublin gig is the very first night of their Irish and UK tour so there’s no setlist to check and compare but the dream set list would include the following

‘There’s no justice in this’: Inside the new Netflix series on Jeffrey Epstein
8