Basque music, Eta and Spain: ‘There is a need to forget the terrible trauma’ 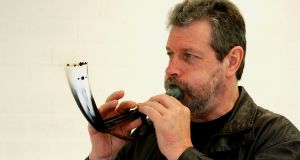 When Alan Griffin initially encountered the alboka, the most arcane of several very distinctively Basque musical instruments, he was distinctly underwhelmed.

In his book Halfway to Hell, he describes his first impression of a performance as “all puffed out cheeks and cow-horns”. He thought it was “a kind of circus trick”.

Yet some 30 years later, he has become a leading performer, prolific composer and scholarly authority on the alboka, and an influential figure in Basque traditional music generally. Yet Griffin was a casual amateur, on flute and tin whistle, and in the Irish tradition only, when he arrived in San Sebastián in 1985.

Bear in mind, too, that the Basques are often reputed to be wary of outsiders, speak a notoriously difficult language and that Griffin ultimately espoused an instrument that was on the verge of extinction in the 1980s. How did Griffin make his way to the heart of the Basque traditional music scene while pursuing a demanding career as a language-school director?

As he tells it, his induction to this half-hidden world came about through the benign application of a national stereotype. He later discovered the alboka through a happy accident related to the naming of his first (and current) band.

“You’re Irish, so you must play music,” was a phrase he heard from Basque friends so often it became self-fulfilling. So he began to get informal invitations to play after sociable dinners – eating is the real Basque religion – whenever there were musicians around the table. There was one particularly memorable all-night session, where a local group, Ganbara, introduced De Danann to the joys of a Basque cider house restaurant. Ganbara’s accordionist, Joxan Goikoetxea, would become Griffin’s regular musical collaborator.

Griffin’s musical engagement shifted several gears when Txomin Artola, a much-loved and accomplished singer-songwriter, heard him play that night. He invited Griffin and Goikoetxea to join him in reviving traditional songs in a new group, Folk Lore Sorta. Their performances and recordings, featuring the haunting vocals of Artola and Amaia Zubiria, were acclaimed by audiences and critics over several years.

“I’m eternally grateful to Txomin for giving me such a good start. He and Amaia made a big contribution to getting traditional music to a bigger public,” says Griffin.

In 1993 Griffin, Goikoetxea, Artola and Josean Martín Zarko formed a new, and initially purely instrumental band. And they called it Alboka, but only because the word itself met their criteria for a marketable and appropriate name: it was short, it was Basque, but easily pronounceable beyond the Basque Country (“we had dreams of international greatness”) and it related to traditional music.

Yet, as Griffin admits ruefully, nobody in the band played the alboka. “And nobody cared. Much, at first.” But as they finished the first album, they decided they were obliged to include a token flourish from their nominal instrument on the last track. It fell to Griffin, as the wind specialist, to give it a go. He doesn’t recommend listening to that piece today.

So his love of the alboka came very slowly, and did not run smooth. He uses the same metaphor for the instrument as the great Basque novelist Bernardo Atxaga uses for the Basque language, Euskera: “A hedgehog, small, spiky, perhaps low on fancy and finesse, but full of individuality and certainly prepared to push its weight around in the company of other, more venerable instruments.”

From the outset, Alboka (the band) had dusted off almost-forgotten airs, mostly for traditional dances. After the first album, there was a parting of the ways with Artola. Griffin and Goikoetxea have remained the heart of the group ever since, collaborating with many musicians from the Basque, Irish and other traditions. From their second album, they began to include new instrumental and lyrical compositions, within traditional formats.

By the early 2000s, the alboka had become his “compulsion”. Halfway to Hell expresses his determination to “let the hedgehog trot into musical gardens from which it was hitherto excluded”, like waltzes, polkas and tangos. The book opens with witty and erudite mini-essays, but its centrepiece is 333 scores for the instrument, many of them composed by Griffin. There are often lyrics, including a wickedly funny satire on the Celtic Tiger, in Euskera. The book’s title reflects both the sweat induced by this whole gargantuan enterprise, and the fact that the number of scores is exactly half the cabalistic number for Satan, 666.

Griffin regularly summers in Clare. He plays in local sessions, and follows the Irish traditional scene closely through collaborations with musicians like Cormac Breatnach. The most recent Alboka album features the virtuoso bouzouki and mandolin of Fiachra Mac Gabhann, whose untimely death cast a shadow on the album’s release.

The Basque scene, he says doesn’t have the same public presence as the Irish one, for several reasons.

“You can’t easily have an informal session, the way we would do here, in the Basque drinking culture. The custom there is to have just one drink in a bar, and then move on down the street for the next one, so there is no settled audience available.

“Also, traditional Basque instruments are not designed to be played indoors, they evolved for traditional street dances and parades.”

And the instruments have different ranges and repertories, and were rarely played together, until Alboka and other bands came on the scene.

“Irish sessions work so well because generations have honed the process, and the instruments are configured in the same keys. You can play Irish music with total strangers for hours, in Dublin, San Francisco or Amsterdam, because we all know the same repertoire.”

What both musics do share is an association of the tradition with national identity, for good or ill. Under the Franco dictatorship, playing a Basque instrument was one of the few ways in which Basque national identity could be expressed in public without (usually) getting a belt of a baton from a Guardia Civil.

For many years, the Basque tradition also cultivated an exclusive and isolated image of itself. This image has been challenged by the musicologist Juan Mari Beltan, a mentor of Griffin’s, in the wonderful small museum he has established near San Sebastián. The displays there vividly demonstrate the links between Basque music and traditions across Spain, Europe, and beyond.

This new awareness of links, rather than borders, has been reflected in Alboka’s own development. The band now sometimes uses a flamenco guitarist, David Escudero. Griffin agrees that this would have been almost unthinkable in a Basque ensemble not too long ago. Flamenco had featured very strongly, mostly against the will of its makers, in Francoist propaganda. The regime promoted Andalusian culture as the essence of a Spanish nationalism that most Basques rejected. So they often also rejected this great neighbouring musical tradition wholesale, as an alien imposition. Happily, that’s no longer the case today.

A parallel embrace of diversity is evident in the lyrics of several songs on Alboka’s latest album. Griffin and Goikoetxea both live in Hernani, a town that suffered some of the most persistent violence of the long and bitter conflict between the Spanish state and the Basque pro-independence group Eta.

The album’s title song, Lurra, Ur, Haize (Earth, Water, Air) is an adaptation of Reconciliation from Ron Kavana’s Irish Ways album. Now that Eta has dissolved itself, Griffin says, there is “a sense of unease and exhaustion in the town, of trying to come to terms with the crimes committed by Eta as well as by the Spanish forces. We wanted to reflect a reaching-out to the other side, of the need to forget this terrible trauma.”

In the same breath, however, Griffin points to another song, Fusilatu zituztenei (“For those who were slain”), which casts a clear eye on the need to remember. Some 200 citizens of Hernani were shot in cold blood by Francoist troops in 1936. Rather shockingly, it is only in the past few years have that these victims of violence have begun to be recognised and honoured. “So we are calling for some sort of accountability as well,” he says.

Bringing the alboka back to life

The alboka makes music through two parallel tubes, with a very unusual stop configuration, five on one tube and three on the other. They sound in unison or harmony, depending on the note played. They are blown, by circular breathing, through two single reeds set in a stock capped by a cow-horn mouthpiece; the sound is amplified at the other end by a larger horn.

There were fewer than half a dozen remaining albokaris (players), with a repertoire of only 20 pieces between them, in the 1980s. There are some 150 albokaris today.

Griffin has been to the forefront of this remarkable revival, making five albums with Alboka, and two with another band he co-founded, Aintzina, which specialises in recovering and composing narrative ballads, but also features his instrumental compositions for the alboka.

Paddy Woodworth is the author of The Basque Country (Oxford, 2007)