Mercury Prize 2018: Wolf Alice win for Visions of a Life 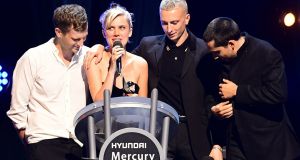 The band Wolf Alice have won this year’s Mercury Prize, beating the favourites for the award.

Wolf Alice’s Visions of Life was one of 12 records shortlisted for the prize, which celebrates the best British or Irish album  and recognises artistic achievement across an eclectic range of contemporary genres.

The winner was announced at a ceremony in London’s Hammersmith Apollo, which was hosted by Radio One DJ Annie Mac.

The band looked stunned as they appeared on stage, with singer Ellie Rowsell saying: “Thank you so much, this means so much to pick this up with my three best friends.”

Theo Ellis added: “When we first started as a band, we walked into a meeting and a geezer said, ‘You don’t look like a band at all’.

“He also said he didn’t want to work with women who wore make up.

“I can’t believe it, big up everyone who was nominated, this means the world, thank you so much.

“Has anyone got a Jagerbomb?”

Arctic Monkeys, Lily Allen and Noel Gallagher’s High Flying Birds were also in the running for the award.

Wolf Alice are the first female-fronted act to win the award since 2011, when PJ Harvey won for a second time with her eighth album, Let England Shake.

Nadine Shah, who was the bookmakers’ favourite to win for her third album, Holiday Destination, criticised what she perceived as the prize’s creeping similarity to the more mainstream Brit awards.

“Now the Mercury is actually run by the same company, the BPI [British Phonographic Industry], I think it needs to find its feet again. It’s controversial of me to say so, but I do criticise it for that. It needs to establish once again, what is it that they’re trying to do. Why is Noel Gallagher being nominated? Why are there only two debut albums?”

The ceremony – at which most of the shortlisted performed – coincided with the publication of nominee Lily Allen’s memoir, My Thoughts Exactly. The singer’s publicist was holding a copy of the book, which has been the subject of tabloid intrigue, as Allen walked the red carpet and welcomed the recognition for her musical achievements.

“I don’t know if it’s vindicating, but I do feel that my record label have been a little bit crap with promoting this record,” she said. “I dunno if you’ve seen any posters or advertising. So it feels amazing that people that care about music have decided to put me in this list.”

She suggested that the revelations in her book – Allen’s first – were responsible for the underwhelming effort on behalf of her label, Island, and claimed it had received a copy of the finished memoir two weeks before she did.

Allen said being nominated was enough of an honour.

When asked if she agreed with fellow nominees Sons of Kemet that an artist who needed the exposure should win, she replied: “Maybe they’ve got a point. But I would still rather it was me!”

No Irish band reveived a nomination for this year's Mercury. Bands bands must pay to enter an album, which costs £190 + VAT.