The pioneering, influential Irish guitarist has died at the age of 75, after a long illness 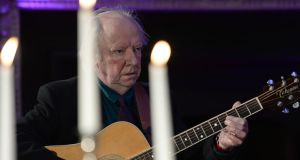 Arty McGlynn was known as one of the finest guitarists in traditional music. Photograph: Artur Widak/NurPhoto/Getty

Tributes have been paid to the pioneering and influential Irish guitarist Arty McGlynn, who died yesterday, at the age of 75, after a long illness. The soloist, accompanist, composer and arranger was known as one of the finest guitarists in traditional Irish music.

In addition to his solo work, he and his wife, the fiddle player Nollaig Casey, had a long musical partnership, recording albums including Lead the Knave and Causeway. He collaborated and played with Patrick Street, Planxty, Four Men and a Dog, Liam O’Flynn, Christy Moore, Dónal Lunny, De Dannan and Van Morrison. He also produced albums by Four Men and a Dog, Frances Black and Christy Hennessy.

McGlynn’s sister-in-law, the harper Máire Ní Chathasaigh, said on Twitter today that she was “heartbroken that Arty McGlynn, my sister Nollaig’s husband & one of the finest guitarists that Ireland has ever produced, has died after a long illness”.

The singer Maura O’Connell tweeted: “My dear friend, the great Arty McGlynn, died today. He was a great help to me starting out in my solo career. He was a genius guitar player and funny as hell. I loved him.”

Heartbroken that Arty McGlynn, my sister Nollaig's husband & one of the finest guitarists that Ireland has ever produced, has died after a long illness. R.I.P. Pic: Arty, Nollaig, Chris & I (Heartstring Quartet) on tour in Australia in happier times. Funeral details later today. pic.twitter.com/eBOuazSeep

So sad to hear of the death of Arty McGlynn.I've known him since his early days with The Plattermen & played alongside him on Van Morrison sessions.He redefined the role of the guitar in Irish music. He was a monster musician & a real https://t.co/ahC0nTp5J4

The songwriter Phil Coulter posted: “I’ve known him since his early days with The Plattermen & played alongside him on Van Morrison sessions. He redefined the role of the guitar in Irish music. He was a monster musician & a real gent.”

The broadcaster and writer John Kelly tweeted: “Another legend gone. The great Arty McGlynn. Thanks for the tunes. There was no better man.”

Born in Omagh, Co Tyrone, to an accordion-playing father and fiddle-playing mother, McGlynn was playing reels on the accordion at the age of five and guitar from the age of 11. He played jazz and popular music before returning to trad, in 1979 recording the influential McGlynn’s Fancy, the first album of traditional Irish tunes on steel-string guitar, and including the reels The Floating Crowbar and Jenny’s Welcome to Charlie.

The late playwright Brian Friel wrote in sleeve notes: “He takes an air like The Blackbird and invests it with Vivaldian elegance. He takes a song like Down by the Sally Gardens, buried for years beneath the rubbish of Feiseanna, and it soars again in its melodic purity. He takes Carolan’s Draught and it acquires Mozartian lyricism and wit.”

As well as recording together, McGlynn and Nollaig Casey’s live performances were popular, particularly the Penguin Cafe Orchestra’s Music for a Found Harmonium. Fans, friends and colleagues have been posting video clips of McGlynn’s music online in tribute since his death yesterday.

Arty McGlynn was honoured for his music by TG4 with a Gradam Saoil lifetime-achievement award in 2016. He is survived by his wife, two daughters and three sons.