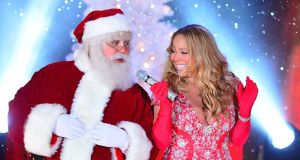 All I Want for Christmas Is You: ‘I know it’s corny, and I don’t care,’ Mariah Carey – performing in 2012 – says. Photograph: James Devaney/FilmMagic/Getty

It is perhaps the most cherished, euphoric and vocally impressive Christmas song of all time, but Mariah Carey’s All I Want for Christmas Is You had never reached No 1 in the United States – until now.

When it was released, as part of an EP, in 1994, US chart rules meant it couldn’t compete with singles. Reclassified as a standalone song in 2000, it has been a seasonal fixture in the charts ever since – and after 25 years has finally reached the top of Billboard’s Hot 100.

It is Carey’s 19th US No 1, inching her closer to The Beatles’ record of 20. It is also the first Christmas song to top the US charts since The Chipmunk Song (Christmas Don’t Be Late), in 1958.

“We did it,” Carey tweeted, adding: “It’s something my die-hard fans think about, and people that are really close to me are talking to me about it literally all year. But I don’t need something else to validate the existence of this song. I used to pick it apart whenever I listened to it, but at this point, I feel like I’m finally able to enjoy it. I just truly love the holidays – I know it’s corny, and I don’t care.”

According to the singer’s version of events, which has coalesced into near-mythic status over the years, All I Want for Christmas first came to her alone at a house in upstate New York as she noodled on a Casio keyboard with It’s a Wonderful Life blasting in the background. She sang a melody and played a chord progression into a mini tape recorder, she says, and later recorded a full arrangement with her frequent collaborator Walter Afanasieff.

Afanasieff, who produced My Heart Will Go On, by Celine Dion, and worked with Carey on hits like Dreamlover and Hero, remembers things differently. “I don’t know how to explain Mariah’s version of things. I know when I look at the song’s copyright – 50 per cent to her, 50 per cent to me – we both wrote the song,” he says. “I sat at the piano with Mariah in the room, and I started plunking out – like I always did, on every single song we’ve ever written together – a particular chord,” hitting upon the boogie-woogie piano that gives the song its driving momentum. (Afanasieff recalls this occurring in the Hamptons, the affluent group of seaside resort at the eastern end of Long Island.)

Carey later finished lyrics, while Afanasieff composed the track, which consisted of no live instruments, on a digital keyboard sequencer. They recorded the song over the summer, decking the studio halls to get in the Christmas spirit. “We just did whatever the hell we wanted, including this totally slow intro-verse that ends in the title of the song,” Afanasieff said, noting that the track does not even have a proper chorus. “There’s no rhyme or reason, it just worked out, even though it broke certain rules. I think that’s part of the reason it’s lived so long.”

Carey has benefited from the growth in streaming, with All I Want for Christmas Is You included on major Christmas playlists by Spotify, Apple Music and others. The music-industry analyst Nielsen says that streams of the song during the Christmas period have gone from 12.6 million in 2014 to 61 million in 2016, and 185 million in 2018. Its US radio plays almost doubled over the same period.

Dave Bakula of Nielsen says: “There are the classics – the standards that everybody grew up with – and then there are the reinterpretations or new originals. Mariah lives in that sweet spot of both... This song is not one of those things that decays year over year, with some old-style message. It’s a simple, straight-ahead pop gem that just happens to be about Christmas.”

This year Carey released a new version of the music video, whose views, along with two pre-existing videos, all count towards its chart placing. As well as creating a children’s book and animated film based on the song, Carey has used it as the basis for a Christmas-themed tour in recent years. “Splashiness, sentimentality, sparkle with all the trimmings – Carey is in her element here,” as one critic put it. – Guardian, New York Times

A Beautiful Day in the Neighborhood: A tremendous film a great young director
5

Philosophy and a little passion: Roy Foster on WB Yeats and politics
7

Man with a Movie Camera review: power to The People
10