NSO chief conductor holds audience in the palm of his hand 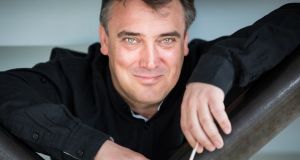 Jaime Martín was in town last week for his second appearance as the new chief conductor of the RTÉ National Symphony Orchestra. He took part in a pre-concert interview in which the orchestra’s general manager Anthony Long also spoke with Swedish composer Albert Schnelzer, whose Burn My Letters – Remembering Clara, a co-commission between the NSO, the Gävle Symphony Orchestra in Sweden and the Los Angeles Chamber Orchestra, was receiving its Irish premiere.

Martín began his career as a flautist, the choice of instrument, he said, being governed by the cost of tuition in his native Santander. He didn’t actually dwell on his achievements in his career as an instrumentalist, but they are substantial enough to merit recounting here.

He’s actually no stranger to Ireland and gave his first concert here with the Irish Chamber Orchestra in 2009, in a programme that included the first performance of Deirdre McKay’s Meltwater. He made his Ulster Orchestra debut in 2013. His NSO debut came in 2016 in a concert that opened with Gerald Barry’s Diner, he replaced an indisposed Joshua Weilerstein in 2017 and returned twice in 2018. His NSO appointment was announced in January 2019, shortly before the first of his three appearances with the orchestra this year.

In conversation he came across as the most ebullient and communicative character to have held the top musical post with the orchestra over the last half century. He’s a voluble storyteller who loves not only sidetracks but sidetracks off sidetracks.

Questions were allowed at the point at which he needed to go and get ready for the concert platform, but an enquiry about Berlioz’s Symphonie fantastique set him off on an enthusiastic journey in which he vividly pictorialness some of the facets of the symphony which get him fired up.

The question sounded as if it had come from a negative position on Berlioz’s best-loved work, and Martín’s detailed response was a fascinating mixture of artistic passion and educational spirit – a group of students arrived late, highlighting the fact that the Symphonie fantastique is a set work for the Leaving Certificate music exams.

Martín didn’t stop there. He decided on the spot – or at least, that’s what he said – to continue the proselytising within the concert itself, which he later did, deconstructing and reconstructing passages of the music to show listeners the significance of various orchestral layers, and illustrating the macabre pictorial elements that can be read from the programme behind the piece.

From the moment he took up the microphone and began to speak from the podium, he had the audience in the palm of his hand. He combined insight and wit with such skill that I doubt anyone in the hall was left untouched by his presentation.

The composition and performance of music are such very complex matters that there are plenty of ardent music lovers who never penetrate the mysteries they find so irresistible.

Musical notation is a huge barrier, and the understanding of a large orchestral score is well on the far side of that barrier. Listeners can take heart from a remark by Gustav Mahler when Arnold Schoenberg showed him the score of his first string quartet, which he had composed in 1904 and 1905.

“I have conducted the most difficult scores of Wagner,” said Mahler. “I have written complicated music myself in scores of up to 30 staves and more; yet here is a score of not more than four staves, and I am unable to read them.” And there was a quantum leap in the difficulty of the music that Schoenberg would later write.

Martín’s examples provided alternative views and side-by-side comparisons that opened up the inner fabric of the music for non-professional ears. The audience’s delight in the whole process was palpable.

The performance itself was gutsy in a larger-than-life way. The characterisation was always vivid, sometimes with colouring that seemed oversaturated, at other times exploring nuances of Berlioz’s endlessly fascinating palette with the utmost refinement. It was a performance without either an idle or a dull moment in it.

Schnelzer’s Burn My Letters, commissioned to mark the bicentenary of the birth of Clara Schumann, was busy and well-crafted, but the effect was rather anodyne, as if the piece was somehow marking time for a big event that never arrived.

The concert also brought the Irish debut of the 18-year-old Cuban-Jamaican violinist Ellinor D’Melon in Tchaikovsky’s Violin Concerto. D’Melon, in spite of her age, is one of those rare players who gives the impression that her command – both technical and musical – is total. Her approach was observant without being demonstrative, and she created the alluring illusion that the music was just being allowed to speak for itself. Simply fabulous.