How a chamber orchestra made Irish musical history 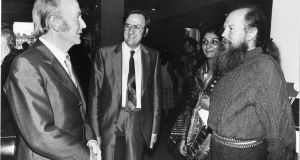 (From left) President Patrick Hillery with Lindsay Armstrong of the New Irish Chamber Orchestra, as well as Garech Browne and his wife Purna, at the National Concert Hall, Dublin, in May 1982. Photograph: Peter Thursfield/The Irish Times

Armstrong, an oboe player in the RTÉ Symphony Orchestra (precursor of today’s RTÉ National Symphony Orchestra), became the founding manager of an Irish orchestra that would successfully traverse three continents. As he proudly says: “At this time of writing, NICO [the New Irish Chamber Orchestra] is still the only orchestra from the Republic of Ireland to have appeared in a Prom.”

There was a reason for the “new” in the title. There was an Irish Chamber Orchestra in the mid-1960s, conducted by János Fürst, a Hungarian violinist in the RTÉ Symphony Orchestra (RTÉSO) who was intent on developing a career as a conductor. His venture ran into opposition in the form of Tibor Paul, who was director of music at RTÉ as well as principal conductor of the RTÉSO. He didn’t relish the idea of facilitating a rival and made it clear that Dublin could not accommodate them both. “As long as I’m here,” he told Fürst, “you won’t conduct.”

Fürst knew he was serious, and left Dublin to become leader of the Ulster Orchestra in 1966. Within a few years his conducting career had taken off.

The spur for the entirely different New Irish Chamber Orchestra was an RTÉ strike in February 1970. The RTÉSO musicians were not on strike, and while they couldn’t pass pickets they decided to continue meeting and rehearsing, and were offered space in Liberty Hall.

The urge to perform was so great that they decided to give a concert, which was hosted by Carysfort College, the site of today’s UCD Michael Smurfit Graduate Business School. The event was such a positive experience it led to an approach from the orchestra’s principal flute, André Prieur.

Prieur wanted to form a new orchestra with himself as conductor and Armstrong as manager. Enough players were interested and agreeable to working as a co-operative – the conductor and manager were paid the same fees as the players – and those involved who were already a member of the RTÉSO continued with their day jobs. After trial runs at schools in Dublin and Mullingar, the first public concert took place in the Exam Hall of TCD on Monday, May 18th, 1970.

The concert was enthusiastically received and the orchestra’s playing standards achieved levels that were rarely reached by the RTÉSO of the time. The choice of works by Bach, Mozart and Pergolesi (one of the Concerti Armonici that’s now known to be by Wassenaer) set the tone for a repertoire that would come to be dominated by Bach, Mozart and Haydn, with Handel, Vivaldi and Beethoven trailing well behind them. Contemporary work did get a look in, but was never a central concern.

It’s interesting to put the first NICO concert in the context of its time. The Ulster Orchestra had played Raymond Warren, Mahler and Brahms at the Ulster Hall earlier in May 1970. The great German soprano Rita Streich gave a concert at the RDS. The RTÉ String Quartet played Haydn, Joseph Horowitz and Schoenberg at the National Gallery prior to a performance at the Bergen Festival in Norway. The RTÉSO performed works by Carl Nielsen and Jindrich Feld in a free concert at St Francis Xavier Hall.

The new orchestra’s first big repertoire statement came in 1973 with the first instalment of a series of Bach cantata concerts under John Beckett at St Ann’s Church on Dublin’s Dawson Street. Prieur was by temperament a warm-hearted romantic. Beckett combined a cut and dried attitude to musical style (and music in general – he hated Handel and Vivaldi) with a passionate engagement in the music he cared about. The Bach cantata series, which lasted into the 1980s, was as close as Dublin came in those years to an annual musical pilgrimage.

The orchestra made its first commercial recording, for the New Irish Recording Company, in 1971, and teamed up with James Galway for the great man’s first recording of Mozart’s flute concertos in 1973. The book comes with a free CD which, among other works performed, includes Shostakovich’s Chamber Symphony, Op 110a, from a 1972 concert given in the presence of the composer.

More remarkable still was the extent to which the orchestra appeared abroad. Between 1972 and 1982, says Armstrong, “NICO undertook no less than 19 tours and appearances in the UK, France, Italy, Belgium, Austria, Switzerland, Germany, as well as the USA, Canada, USSR and China. ” He was a spare-time manager of the orchestra until 1979, when Arts Council funding enabled him to give up his RTÉ job.

His book is mostly a list of programmes, annotated through sometimes hazy recollections, with a few longer and more detailed passages as pillars. There are amusing stories along the way – bribing porters at Heathrow, having a double bass hoisted by a crane in Switzerland, putting his foot in it in China – but the potential interest of the book is weakened by the lack of perspectives from the orchestral players, conductors and soloists who also made the venture possible.

The book trails off in the early 1980s, before NICO would drop the word “new” from its name (a move taken in 1988), and, with attractive contracts for its players, would relocate to Limerick (which occurred in 1995). There’s a whole other history of the orchestra to be written beyond the memories collected here.

Rob Doyle: ‘Through writing, you can redeem even a disastrous life’
6

Don’t Be Evil: The Case Against Big Tech: Important book on corporate giants
9