Women proved easy targets for the Black and Tans and were regularly terrorised in their homes by threatening, abusive and drunk soldiers 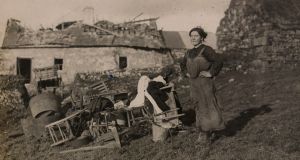 Miss Brown alongside her family’s belongings in Meelin, Co Cork. She was forced out of her home by crown forces in revenge for an IRA ambush a few days before. Photograph courtesy of the National Library of Ireland

The Irish War of Independence (1919-1921) represents a fascinating example of a guerrilla war which blurred the boundaries between “home front” and “battle front” – civilians and combatants. While the IRA flying columns were in many ways an invisible and highly mobile army, women who remained in the “privacy” of the domestic sphere became easy targets for frustrated British soldiers. The Interim Report of the American Commission on Conditions in Ireland reported the frequency with which “the sanctity of the family home is violated”; recording 48,474 British army raids on Irish homes in 1920. The British Labour Party also formed a commission to investigate events in Ireland. Lil Conlon, a stalwart of Cumann na mBan, who wrote a book about the organisation, recalled: “Evidence was taken in connection with the effect house raids had on women and children by the Crown forces . . . Several houses were visited which had been raided and the actual experience of such women who were present at these ordeals”.

My research into violence against women during the War of Independence, first published in 2000, demonstrates how the British forces targeted the civilian population. I draw on a range of sources – including the mainstream Irish press, the Republican press and autobiographical accounts.

Our image of the War of Independence is framed in many ways by the autobiographical accounts of former IRA fighters including Tom Barry and Ernie O’Malley. Such stories tend to emphasise the heroic deeds of brave young men as an underdog, guerrilla army of courageous amateurs taking on the might of the British army. Only in recent years have the stories of women begun to be heard.

He was so drunk it seemed as if he was keeping himself standing by holding on to the rifle resting on my chest . . . he kept on saying ‘I’ll teach you’

It is important to note that several women and girls were killed during the war, usually shot in the crossfire between the British military and the IRA. For example, in November 1920, the deaths of four women and girls were reported in the southern provincial daily newspaper the Cork Examiner. A 15-year-old girl was shot dead in Kerry when “a pitched battle took place between armed civilians and Black and Tans”.

One of the most publicised civilian shootings was the killing of 23-year-old Ellen Quinn while she sat with her young children in the garden of her Co Galway home. She was seven months’ pregnant. Before she died, Mrs Quinn reported having been shot at from a passing police car. Several local people reported seeing a police car in the area at the time. Her local priest, Fr Considine, led a vocal campaign for an inquiry into the shooting. The findings of the military court, which consisted of three British army officers, were reported in the Cork Examiner (November 6th, 1920). The court concluded that Mrs Quinn had been accidentally shot by some unknown occupant of a police car. The official finding was “death by misadventure”.

In the context of press censorship, newspaper reports of military raids tended to be brief and somewhat vague. More detailed accounts can be found in autobiographical sources. Kathleen Clarke, whose husband Tom, a signatory of the Proclamation, was executed in 1916, was the mother of three young children. As a former Republican prisoner and a prominent Sinn Féin councillor, Mrs Clarke was kept under surveillance and her home was regularly raided. She describes one military raid involving “seven men, all drunk”. One soldier entered the bedroom where Clarke was comforting her children: “He was armed with a rifle and was quite drunk. He put the muzzle of the rifle resting on my chest . . . He was so drunk it seemed as if he was keeping himself standing by holding on to the rifle resting on my chest . . . he kept on saying ‘I’ll teach you’, over and over, holding on to his rifle and reeling about, until there was a call for him from downstairs.”

In his account of the War of Independence, the Cork-based IRA commander Florence ‘Florrie’ O’Donoghue also suggests that raiding parties were frequently drunk. Trained in trench warfare, these soldiers were utterly unfamiliar with guerrilla tactics. Finding themselves in Ireland facing a ubiquitous but invisible enemy, O’Donoghue claims that the men were often “fear ridden and drunken”.

Of all the British forces in Ireland, the Black and Tans – so-called because of their two-tone uniform – were probably the most hated. As a child growing up in Cork, I can remember elderly people talking about the Tans as the memories lived on in stories and songs. In his memoirs of the war, Dan Breen says “the words Black and Tans have become a symbol of terrorism”. Although they constituted only a fraction of the occupation forces, the ‘Tans’ are the most frequently mentioned in Republican autobiographies. Images of the “drunken Tan” dominate accounts of military raids and reprisals.

In addition to being violent, disorderly and threatening, Tans are also depicted as foreign and alien. The ‘otherness’ of the Tans was underlined by their strange uniform, their apparent drunkenness and their English accents. Describing a military attack on Fermoy town, O’Donoghue claims that: “Above the crash of breaking glass as shop windows were smashed in, the cockney accents of drunken soldier arose in intermittent shouts.”

Historian Helen Litton says the Tans had been “hastily recruited from the ranks of British ex-service men”, discipline was “non-existent” and “tales of their uncontrolled violence still haunt many counties in Ireland”. According to historian Margaret Ward, the Black and Tans, who arrived in Ireland in 1920, were little more than “paid mercenaries” who resorted to “wholesale destruction of property and indiscriminate murder”.

In their accounts of encounters with ‘drunken Tans’, both Kathleen Clarke and Cork-woman Kathleen Keyes McDonnell offer fairly typical narratives. Houses occupied by women and children raided at night by armed men, the terror of the situation underlined by the fact that the men were rude, insulting, threatening and undisciplined. The image of drunkenness encapsulates all of these characteristics. Women dressed in night clothes facing uniformed, armed men indicates the inequality and potential danger of the encounter. But it is also possible to interpret these memoirs as testimonies of bravery, conviction and determination as well as terror and vulnerability.

While acknowledging gender-based violence, it is important not to regard women simply as victims. Despite their obvious fear (Mrs Keyes McDonnell suffered a heart attack following a series of nightly raids), these women remained steadfast to the Republican cause and never divulged any information to the ‘Tans’. Although it was an extremely serious offence to harbour a wanted man, women continued to operate ‘safe houses’ and to shield IRA men even in the most militarised districts. In the context of a guerrilla war, the active role played by women cannot be ignored.

Louise Ryan is professor of sociology at the University of Sheffield. She is the author of the influential article ‘Drunken Tans’: Representations of Sex and Violence in the Anglo-Irish War (1919-21). Feminist Review, (2000). She has also published widely on the suffrage movement and the history of migration

The Movie Quiz: What is the completely made-up tagline for Jaws 19?
8