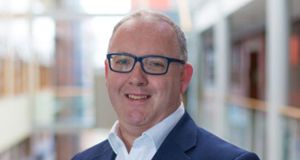 Kevin Rafter, head of the school of communications at Dublin City University, has been named the new chairman of the Arts Council of Ireland.

Rafter, who succeeds Sheila Pratschke, said he was honoured to take on the role and “support artists to present their work and to increase access to the arts so that the public continues to be challenged and engaged by these creative people”.

The chairman designate, who will appear before the Oireachtas Committee on Culture, Heritage and the Gaeltacht in due course, will head a board of 12 other members. The chair is entitled to an annual fee of €8,978; other members, similarly appointed to five-year terms, receive €5,985.

Before moving to Dublin City University he was head of the department of film and media at the Institute of Art, Design and Technology in Dún Laoghaire. A specialist in politics and election coverage, he has written numerous books, including, with several colleagues, Resilient Reporting: Media Coverage of Irish Elections since 1969, which was published this month.

Until 2008 Rafter was a journalist, working at The Irish Times, the Sunday Times and the Sunday Tribune. He also edited and presented This Week, on RTÉ Radio 1, and has produced documentaries on visual artists for RTÉ and Newstalk.