The Universe Speaks in Numbers review: maths and the real world 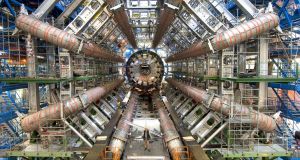 The big collider at CERN in Geneva, where physicists smash tiny particles together. Photograph: CERN/PA Wire

Modern physics convinces that human curiosity has no bounds. Show us a particle, however tiny, and someone asks: what’s inside? Then we try smashing some together to try to find out.

For all its towering technical sophistication, that is the job of the big collider at CERN in Geneva. Two beams of protons whizz opposite ways round a 27 kilometre circle until they are just shy of the speed of light, then are nudged together. Hundreds of millions of proton pairs collide, each triggering a minuscule shower of debris.

To see through the rain, you need a catalogue of what theorists predict might be there – so new signals stand out. Until a few years ago, techniques for weighing the chances of different outcomes were too cumbersome to use. Several brilliant new approaches got round this. One uses an exotic geometric object, a bit like a triangle but with many more dimensions. The so-called scattering amplitudes can be derived by calculating the volume of the corresponding object.

This wondrous beast, dubbed the amplituhedron, is the most impressive exhibit in Graham Farmelo’s account of how physics and mathematics are bound together. In this case, the key was stumbling across a piece of 19th century geometry well-known to mathematicians, but not to particle theorists.

It made calculation a doddle, and – unexpectedly – implied a recasting of the quantum theory of particle interactions that says space and time themselves are products of an underlying geometry, not fundamentals of nature.

Such findings are rare, but seemingly miraculous. Every now and again, a discovery in mathematics teased out with no thought of connection to the real world turns out to be a perfect fit with the way things are.

The book provides a rich history of this interplay, along with a well-informed account of how it has worked in recent decades. Farmelo deftly retraces the growing realisation that maths can unlock understanding of real phenomena, as it came to Galileo, Newton, Einstein and, his favourites, James Clerk Maxwell and the quantum theorist Paul Dirac. Farmelo’s earlier edited collection, It Must be Beautiful, also features Dirac, and he wrote an award-winning biography. He is a bit of devotee – of the man and of his “principle of mathematical beauty”, that theorists should heed the most aesthetically pleasing maths they can find.

That allegiance that serves him well in the second part of this book, built on insightful interviews with contemporary theorists. He sees a recovery of faith in purely mathematical exploration as a route to progress in physics, a faith that faltered in the mid-twentieth century. Its resurgence has opened up rich veins of new theory, especially related to the great unsolved problem of uniting quantum mechanics with Einstein’s general relativity. Also, he suggests, it has recently allowed physicists to make unexpected contributions to maths.

All this is tantalising for the less mathematically adept reader. Farmelo is laying out positions in great debates about how to achieve an understanding of what exists in our universe. It’s clear that there are different views. But it is spectacularly pointless to have an opinion oneself. While science can be the most satisfying spectator sport, not all of the games scientists play reward the onlooker. For this science buff, trying to follow theoretical physics feels like a knowledgeable football fan trying to make sense of a chess tournament – a tournament, moreover, where the rules of the game have been encrypted in an unbreakable code.

Farmelo does proffer an occasional equation, always in the simplest form. He will then explain with some variation of: “Symbol A is a mathematical object representing a crucial physical parameter.” We do not learn what kind of mathematical object it is, or what properties it may have. The author does not know how to convey that in words. Nor does anyone else, really. Real understanding depends unavoidably on doing the maths, not describing it. The universe does speak in numbers. Yet assurances that its utterances are incomparably poetic have to be taken on trust.

Should we? Farmelo, and his favourite physicists, are clear that the appeal of mathematical beauty must not obscure the need to test theories with actual observations. He acknowledges that there are strong critics of the widely touted new approach, known as string theory, which accounts for the plethora of particles and fields in terms of the properties of an underlying, string-like entity. Its results, drawing on notably arcane higher-dimensional geometry, are impressive, but it makes no predictions that can be tested with any apparatus we can build. His informed judgment is measured. He allows that there is probably something in all this stuff, but also suggests that future progress will be a lot slower than theorists have been used to. Physicists will keep looking for the maths, and the experiments, that can prove him wrong.