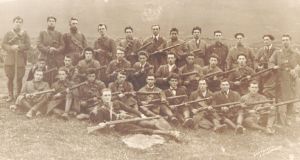 Five IRA men were killed when an ambush went horribly wrong outside Westport in May 1921.

The incident at Kilmeena between Westport and Newport was one of the worst reverses for the IRA in the War of Independence.

The attempt to ambush two Crossley tenders and a Ford car failed when one of the lorries evaded the ambushers and the soldiers involved got out.

The heavily armed soldiers used a machine gun against men who only had shotguns.

The army was “fully armed with full protection on the road side of the fence while the machine gun was in a position to rake them from the flank”, according to an account in the Brigade Activity Report of the West Mayo Brigade.

One of those who died was Paddy Jordan, the vice commandant of the Castlebar battalion. Years later, his father Patrick wrote requesting financial assistance, saying he had only five acres of reclaimed bog to live on and his son’s last words was that the new Irish government would make provision for him and his wife in the event of his death. He eventually received a £50 gratuity from the State.

The local IRA avenged Kilmeena a month later at Carrowkennedy between Westport and Leenane when three lorries carrying Crown forces were held up. Again, the soldiers dismounted to return fire, but this time the machine gunner was killed early in the fight, which lasted six hours.

The West Mayo Brigade reports state that this was “by far the most successful ambush” which took place in the area, leading to the deaths of six RIC men and British troops and the capture of all their weaponry.

“Every single member of the enemy forces in this engagement fell into the hands of the IRA column.”

One of those involved in the Carrowkennedy ambush was Commandant Michael Joseph Ring and his home was burned to the ground.

He was later killed in Drumsheen in the Ox Mountains during the Civil War in September 1922 while serving as a brigadier general with the National Army.

Ring’s sister Elsie Geraghty was eventually awarded a dependents’ gratuity of £150 under the Army Pension Act.

Michael Joseph Ring is a great-uncle of the Minister for Rural & Community Development and Fine Gael TD Michael Ring.

Among those who lobbied on behalf of the Ring family for a dependents’ allowance was Fine Gael TD Harry Kenny, the father of Enda Kenny.

Cumann na mBan was also very active in Mayo. The mother of a Cumann na mBan volunteer who was raped by National Army forces after the Civil War received a partial dependents’ gratuity of £112.10 in 1937.

Margaret Doherty died in Castlebar Mental Hospital of TB in 1928 at the age of 32.

In her submission for a pension, her mother Catherine Doherty claimed Miss Doherty had been the victim of “dastardly acts committed by officers of the Free State army” in May 1923. She had been in good health before the incident occurred, but after that her physical and mental health declined.

A doctor’s report in her pension file records that before she died she was “nervous and depressed and suffering from acute mental trouble”.