The Revolution Files: Men fabricated raids and arms seizures to get pensions because they were in dire financial straits 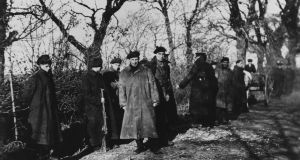 A group of Black and Tans on a trench road in Tipperary, while assisting the British Army during the War of Independence, 1921. From the AE Bell Collection. Photograph: Hulton Archive/Getty Images

A group of IRA volunteers conspired to lie about their involvement in the War of Independence because many of them were in dire financial straits.

The men from Cloone in Co Leitrim admitted they had fabricated a raid on the RIC barracks locally, had not disarmed RIC men and the number of guns they had got in raids had been “grossly exaggerated”.

The confession came from Patrick James Doherty, who held the rank of captain in the 5th battalion of the North Roscommon Brigade.

He admitted to a “conspiracy to produce false evidence for the purpose of securing the re-hearing of his own claim and those of other volunteers in and around Cloone” and that numerous meetings had been held locally to produce “fresh evidence”.

Doherty apologised to the referee adjudicating their claims but said he and others had been in “straitened circumstances” and there had been “considerable dissatisfaction” in the area about the refusal of pension applications.

The most significant event in Leitrim during the War of Independence was the ambush at Selton Hill near Mohill on March 11th, 1921.

Six IRA men were killed after an informant reported the position of an ambush to the British army, making it one of the worst reverses for the IRA during the War of Independence.

The IRA dead were Comdt Sean Connolly, who was the commanding officer, Séamus Wrynne, Joseph O’Beirne (or Beirne), John Reilly, Joseph Reilly, and Michael Baxter. In addition, two men were injured and then captured.

The brigade activity reports of the North Roscommon Brigade reveal that the IRA lying in wait at Selton Hill were surprised when 30 soldiers arrived in lorries armed with rifles and Lewis machine guns.

This was despite a warning shot from a friendly RIC man which Connolly mistakenly believed was evidence that the army did not know of the waiting ambush.

Connolly was shot dead as he emerged from a safe house owned by James Flynn, a local man sympathetic to the volunteers. The five other men were killed as the house was surrounded by men from the Bedfordshire Regiment.

The Brigade Activity Reports do not name the two informants. They have been named since as Protestant farmer and Orange man William Lattimer, who was shot dead two weeks later by the IRA.

He passed the information on to a local doctor, Dr Charlie Pentland, who had served as a doctor in the first World War. Pentland fled Ireland after Selton Hill and died in a road accident in London in 1924.

A week previously, on March 4th, the IRA had carried out a successful ambush on the same regiment at Sheemore, a prominent hill outside Carrick-on-Shannon.

Arrangements had been made to ambush the soldiers on the way to the church, but the ambush party was not in position when the soldiers arrived in a lorry.

However, they were present when surprisingly the soldiers decided to return by the same route. Ten IRA volunteers opened up on the three lorries carrying about 35 men.

The Brigade Activity Reports of the North Roscommon Brigade claim that 10 British soldiers were killed in the ambush. However, the British only claimed one dead, Second Lieutenant Eric Wilson from Middlesex. Contemporary media reports suggest that four soldiers and two RIC men were also wounded in the ambush.