The Céide Fields: a Mayo miracle older than the pyramids 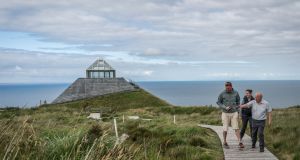 The very fact that beneath the wild heathery bogs of north Mayo lies the most extensive Stone Age monument in the world is both humbling and hard to grasp. The idea that we can walk in the steps of our ancestors from 5,000 years ago, following along old barley ridges where they would once have cast their seeds and knelt to weed their precious crops is a cause of wonder.

The intricate remains of their prehistoric farming lives – fields, cattle byres and burials tombs – lie perfectly cossetted in peat moss across thousands of acres of Mayo between Ballycastle and Belmullet, and we can visit them at any time to reorient ourselves and remind ourselves who and what we really were 2,000 years before the pyramids were ever built.

The story behind the discovery of this lost world is as magical as any Hollywood movie. The local schoolmaster, Patrick Caulfield from Belderrig, noticed piles of stones in long lines deep beneath the peat when cutting turf in the 1930s. It dawned on him that since the walls must predate the bog, they had to be truly ancient, and he wrote to inform the National Museum in Dublin, but during the war years they couldn’t spare the petrol to drive west to investigate.

It was 40 years later before Patrick’s son, Seamas, graduated as an archaeologist and began to explore further, using iron probes (traditionally used for finding ancient trees under deep bog) to follow the tracks of the walls over many acres deep beneath the earth. Carbon-dating later proved the site dated from 200 generations earlier, and revealed a picture of a highly organised, peaceful community working together to clear vast swathes of forestry and divide the land into regular field systems.

There is now an extensive OPW interpretative centre dedicated to the area, but since Seamas retired from his role as professor of archaeology in UCD, he also runs personalised tours along with his son Declan, who continues the family tradition of archaeological research by experimenting to replicate the cultivation plots and farming methods practised here thousands of years ago. Declan’s farm straddles the site of the original Stone Age and Bronze Age settlements excavated by his father in the 1970s. He is growing ancient strains of barley and dealing with the same challenges of wind damage and bird predation that his forebears must have encountered.

Declan accompanies his father on all the field trips and tours of Belderrig Valley and also leads trips when his father is unable to attend. The tours, which range from two-hour overviews to two-day immersive experiences, include a private tour of the Céide Fields Interpretative Centre, demonstrations of various quern stones and how local grains were milled, insights into the old building techniques using stone and wood and an introduction, in the laboratory of their research centre, into their current study of the strains of barley and oats that were farmed here.

A guiding principle of the tours is summed up in the local proverb about seeking stray sheep in the hills: Is fearr lá ag fiafraí ná trí lá ag siúil (one day of asking is better than three days of walking). When Declan took me out on to a remote stretch of blanket bog and showed me how to “map” the walls deep beneath my feet by using bamboo poles to probe for them I had an unsettling sense of summoning the ancient past into the 21st century. I could suddenly understand how some locals were reluctant to help with the original archaeological dig, with one Belderrig man, John Dan McCann, asking Seamas could he be excused from excavating the remains of a 4,000-year-old house as his personal beliefs told him that such structures should not be interfered with.

“I had him work instead on removing the last bit of black bog from the brown topsoil,” Seamas recalls, “and as he worked, removing the final skim of topsoil I could see the brown soil that our Bronze Age farmers would have farmed coming into view: a pattern of cultivation ridges separated by ‘seochs’, just like modern potato ridges. In fact John Dan turned to me and said, ‘I grew oats on ridges like these 40 years ago.’ ”

It’s an uncanny feeling to walk on ground that our ancestors harvested so many autumns ago. Suddenly the meaning of the old Irish proverb about ridges become clear: three times the life of a whale is the lifespan of a ridge, and three times the life of a ridge is the lifespan of the world. (Saol trí mhíol mhór saol an iomaire, saol trí iomaire saol an domhain.) It’s dizzying, heady stuff when you are standing knee-deep in heather and bog cotton surrounded by the ocean and an Atlantic wind blowing in your face.

THE DATING OF THE CÉIDE FIELDS

Earlier this year, the date of the Céide Fields was challenged by the archaeologist Andre Whitefeld in the European Journal of Archaeology. He claimed the site was 2,500 younger than previously believed. In response, Caulfield and other archaeologists have highlighted the numerous fundamental errors of fact in Whitefield’s published paper. Further research by palaeobotanists should put the matter to rest.