The Molly Malone statue outside St. Andrew's Church on the top of Suffolk Street, is popular amongst tourists and locals. Video: Ronan McGreevy 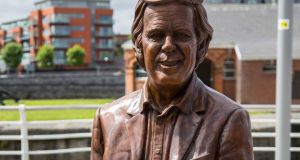 When it comes to public sculpture, it may well be the case that critical disdain does not necessarily lead to public disdain. Indeed, the opposite may be the case – the public seems to love the quirky, the flawed and the offbeat.

Would the leaning tower at Pisa be as universally known if it stood upright?

The Wogan sculpture has been called the “father of Ronaldo” after its resemblance to the much derided bust of the Real Madrid and Portuguese footballer. That statue at Madeira airport resembles a clay model of Ronaldo left out in the rain for a week. Nevertheless, it is already a tourist attraction in its own right.

The illustrator Annie West has posted photographs of the Ronaldo and Wogan creations, along with the recently unveiled sculpture of the athlete Sonia O’Sullivan, on her Twitter page. She tweeted: “Granny’s advice: Don’t achieve greatness. Because this is what happens if you do.”

The recent sculptures in Limerick of Wogan and Munster rugby player and coach Anthony Foley have attracted controversy, with claims they were a “wasted opportunity” and an insult to their subjects. 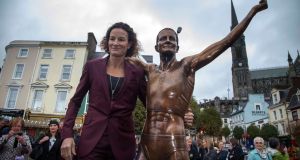 In pictures: The statues we love and hate

However, the outgoing mayor of Limerick, Cllr Kieran O’Hanlon, said he has been “surprised” by the negative reaction to the Wogan sculpture and is not accepting “any criticism whatsoever” of it.

“I think it’s beautiful and I think it reflects Terry Wogan at his best. I’m absolutely delighted with the location and the memorial itself. No matter what you do, there will always be critics,” he told the Limerick Leader.

The bronze life-size sculpture of the broadcaster is at Poor Man’s Kilkee in Limerick city, while a stone memorial to Foley was recently unveiled on Clancy Strand.

Fianna Fáil TD Willie O’Dea said both pieces are “faulty in that they don’t bear any likeness to their subjects. I’m not an expert on sculptures, but I wouldn’t recognise Terry Wogan at all”.

Limerick artist Samuel Walsh said they were inadequate pieces of public art. “Limerick council should expect an avalanche of ridicule to come down on their heads, for this is what you get when you let politicians make decisions about public sculpture in contemporary society.”

The newly-elected Metropolitan Mayor of Limerick, Fianna Fáil councillor Seán Lynch, said he initially thought the Wogan sculpture looked like the late singer Joe Dolan. “It is still a fabulous piece of work and it’s a brilliant location, but Wogan’s features were a bit more round. This is like a slimmed-down version of Wogan.”

Foley’s sister Rosie praised the piece celebrating her brother as an “outstanding tribute” at a “beautiful location” along Clancy Strand, just yards from the Treaty Stone.

In Dublin, those with long enough memories might recall the rumpus over the “Floozie in the Jacuzzi”Anna Lava monument and the Molly Malone statue.

Fast forward almost 30 years and the Molly Malone statue is the most popular sculpture among visitors to Dublin. A daily procession of tourists come to be photographed beside it.

“If you touch Molly Malone’s breasts, you get 10 years of strength and fortitude, so make sure you do it before you go,” tour guide Christian Twarowski explains to his group of tourists.

Turkish tour guide Sinan Ercan said he brought his group of tourists with him to see the statue because he heard Dublin people liked it. But their preference was for the statue of Oscar Wilde in Merrion Square.