The Times We Lived In: It’s a long, long way from here to Clare 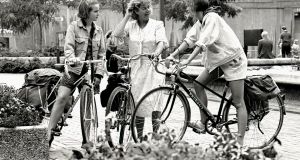 Some photos sing a song of summer – and this is one of those photos. Bright days, bare legs, bikes, leafy trees in the background. Three women enjoying each other’s company. It’s enough to make even the most reluctant cyclist think about getting out and about on two wheels.

A closer look reveals the cyclist at the centre of the image to be the inimitable Nuala O’Faolain, who wrote for this newspaper for many years. She is flanked by her nieces Marian Conroy (left) and Cailin Brady (right). “Here they are photographed,” the caption cheerily declares, “before their adventure began, when they wondered if they’d make it to Lucan, never mind Lahinch.”

Adventure, it turns out, is the word. It starts with a mad idea of Nuala’s: why not cycle from Dublin to the family’s summer house in Lahinch, and write about it for The Irish Times? Bikes were hired. The girls were up for it – bribed by their aunt with promises of luxury hotels. The journey would be rolled out in the paper as a four-part series.

There was just one problem. “I could ride the thing all right,” Nuala writes of her rented bike. “But not in traffic.” So they got a bus to Celbridge – where, presumably, this delightful picture was taken. Then they mounted up and headed off along the leafy banks of the Grand Canal.

By the end of the opening article, needless to say, the idyll was beginning to unravel. “I’d told the girls that at night they could explore the youth scene, while I read my book over a glass or two of chilled Chablis,” Nuala wrote. “In actual fact, we are drenched to the skin, we don’t know where we’ll be eating or sleeping, and we’re still only at the mushroom factory in Carbury. And our bums are killing us.”

Despite the absence of the sort of cycling staples we now take for granted – Lycra clothing, water bottles, helmets – they made it to Lahinch. They were greeted by “mammies, cousins, babies, sisters . . . cheers and applause”. And our readers heaved a huge sigh of relief and joy.

These and other Irish Times images can be purchased from:

irishtimes.com/photosales. A book, ‘The Times We Lived In’, with more than 100 photographs and commentary by Arminta Wallace, published by Irish Times Books, is in bookshops now priced €19.99.