The National Library of Ireland announces plans for a four-year €10 million redevelopment project that will see the creation of a new exhibition space, lecture room, cafe and retail space. 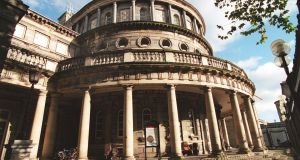 The renovation works will see 500,000 books moved to the library’s east wing. Photograph: The Irish Times

Plans have been announced to swap the functions of the east and west wings of the National Library as part of a €10 million renovation project that begins in October.

The library secured funding for the “reimagining” of its Kildare Street building in October 2015, and Wednesday saw the unveiling of plans to transform the Victorian-era west wing, used for storage, into a refurbished public area with new entrance.

The works were necessary due to inappropriate storage of books in the west wing in a cramped space close to exposed wires, with little means of fire prevention.

The process of swapping 500,000 books to the library’s east wing, which was renovated in the early 2000s, will commence from October.

A team of 20 staff are expected to complete the changeover by the beginning of 2018 when work can begin on creating the new public section to house an exhibition space, a lecture room, a café and retail space, as well as a new entrance closer to Kildare Street.

The project is expected to take four years to complete.

National Library of Ireland director Dr Sandra Collins described the renovation as a “once-in-a-lifetime opportunity” and said many precious books are currently being “attacked” by the damaging conditions in the west wing.

“The west wing of our building has no fire suppression, and the conditions of damp, heat, dust and dirt attack the books which we care for.

“That is why we are so excited today about this once-in-a-lifetime opportunity to ensure that this national collection in our care will be kept safe and protected,” she said.

Minister for Culture and Heritage Heather Humphreys said the National Library will now be the “envy” of its international peer institutions.

“The Victorian design was such that the library would be filled with natural light, and we now know that this is not the optimum way to store books,” she said.

“One hundred and twenty-seven years on from its opening we will be able to ensure that it not only survives but prospers over the next 100 years through this development programme,” the Minister said.

While thankful of the major capital investment, Dr Collins said she hoped the continued improvement in economic circumstances will lead to the creation of new posts for the “understaffed” library.

“One of the big challenges for us is on the staffing side. The project is a capital investment. If we are to look across the sea at our neighbours in the national libraries of Wales or Scotland we can see that they have three times as many staff as us,” she said.

A major digitisation process of library materials will continue during the renovation, Dr Collins said.

Access to some areas will be curtailed at intervals during the works. The main and manuscript reading rooms will be closed on Mondays from August 14th, and items from the library’s prints, drawings and ephemera collections will only be viewable online.