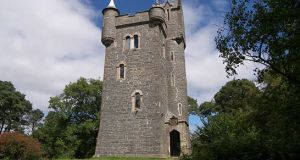 Helen’s Tower, Bangor, Co Down, one of the Landmark Trust’s properties, is nestled deep in the woods of the Clandeboye Estate. Photograph: Courtesy of Landmark Trust

The Landmark Trust has rescued lighthouses, schoolhouses, thatched cottages, even a castle or two from destruction since it was founded a quarter of a century ago.

On Saturday, the trust celebrates its 25th anniversary in the Long Gallery of Castletown House, a sumptuous Palladian house built in the 18th century for the speaker of the House of Commons, William Conolly.

The imposing Kildare mansion is not the sort of landmark the trust was set up to protect. Instead, its brief has been to rescue, restore and bring back to life buildings that are romantic, eclectic and, in some cases, downright odd.

The anniversary is but a blink of an eye in the lifespan of most of the buildings which have been saved, restored and managed, but it is a significant milestone, nevertheless, says the trust’s director Mary O’Brien.

“It was very much modelled on the principles of the Landmark Trust in the UK,” recalls O’Brien, adding that it took it three years from its foundation in 1992 before it was able to open its first property, Wicklow Head Lighthouse.

“The Irish Georgian Society was championing the bigger houses, but there was a gap for smaller buildings. In 1992, the protection of architectural heritage wasn’t embedded in legislation as it is now,” she went on.

Like so many other bodies, Landmark benefited from the quiet generosity of US billionaire Chuck Feeney’s Atlantic Philanthropies. “Without that money it wouldn’t have been possible,” she says.

The business model of the non-profit trust is simple: it takes over endangered properties from owners, usually on a lifetime lease, restores them and then rents them out as self-catering holiday rentals.

Since its creation, it has saved 31 historic buildings, while also giving the opportunity for artisans, builders and craftspeople to revive traditional skills that might otherwise be lost.

The oldest property currently on its books is Clomantagh Castle, a medieval tower house in Freshford, Co Kilkenny dating from the early 1400s. Gothic fans can choose the Barbican, a battlemented gate lodge in the Glens of Antrim.

Those seeking the romantic can opt for Annes Grove Miniature Castle, a Disney-esque Victorian folly in Castletown Roche, Co Cork, or any of a number of bracing lighthouses.

“We had to convince Fáilte Ireland that it’s okay not to have a television,” she went on, though the renovated properties are fitted out to a high quality with modern kitchens, bathrooms and comfortable sleeping-quarters.

But each retains its integrity. “For me, that’s the exciting part of it, says O’Brien. “Buildings always adapt over the years.”

Now, Landmark is old enough to have to consider the challenge of renovating its own renovations.

O’Brien believes there are a range of institutional buildings which are now under pressure and ripe for renovation.

“I’m beginning to look at things like transport buildings,” she says, “Some of the train stations are absolutely beautiful.”