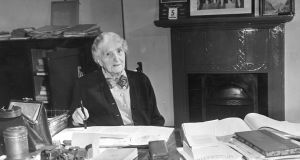 In the 1950s, The Irish Times carried a weekly slot called Portrait Gallery. A short feature article which painted a pen picture of personalities of the day, on this particular day it was devoted to Louie Bennett, one of the heroes of Irish feminism and trade unionism.

She organised the Irish Women Workers’ Union into a force which fought, not only to give women a greater voice in the workplace, but to improve their status in society. Having served IWWU as general secretary for 38 years, she went on to become the first woman president of the ITUC.

Given all of the above, and the defiant tone of the piece – “Louie Bennett, from her early youth, refused to conform to the accepted pattern. When she and her sisters were sent to a young ladies’ academy in London their first act was to form an ‘Irish League’, which became the terror of the school” – you might expect the picture to be rather more prepossessing than it is.

There has been no attempt to prettify Ms Bennett’s office. A cupboard door lies open, revealing the piles of documents within. On the desk, her handbag has also been left open. There are no flowers on the desk, no jugs of water. Instead, a tiny travel alarm sits at the centre of the shot, a firm reminder that this 83-year-old worker has more to be doing than posing for newspaper photographs.

Dermot Barry, however, is an astute storyteller. His subject may be up to her elbows in papers, but she’s not swamped by them; the busy desk is tidy. Placed slightly left of centre, she shares pride of place with the large photo propped on the mantelpiece which shows rows and rows of women, probably at an IWWU meeting.

Bennett is, literally, amongst women. Her expression as she looks at the camera is alert, shrewd and – is she actually tapping that pen on that ledger? – slightly impatient. Finally, there’s that bow-tie. A flash – just a flash – of flamboyance. Brilliant.

These and other Irish Times images can be purchased from: irishtimes.com/photosales. A book, “The Times We Lived In”, with more than 100 photographs and commentary by Arminta Wallace, published by Irish Times Books, is available from irishtimes.com and from bookshops, priced at €19.99.

Micheál Martin wants us to have ‘a meaningful Christmas’ – but what does that mean?
9