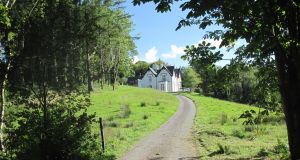 Rosebank house: A central focus of the festival will be the deeds of various informers, murderers, double-crossers and looters in the West Cork region

The Irish obsession with history is akin to that of Italians for food and the French for love. It is our motivating force, an internal propellant that informs so much about our attitude to the world, and so it is little wonder that a large-scale multi-day history festival is now hoping to compete with the myriad arts and music festivals that jostle for attention throughout the summer.

The West Cork History Festival on the grounds of Rosebank, a dower house of the Lissard Estate just outside Skibbereen, will feature a range of muck-rakers and idea-peddlers alongside ambassadors and historians, all keen to stir up debate, kicking sacred cows and hornets’ nests in the hopes of stirring up ideas and resolving old animosities from July 28th-30th.

It is the brainchild of Simon Kingston, owner of Rosebank, and a headhunter for non-profit organisations such as the African Development Bank, the Gates Foundations, the World Bank and the Global Fund. His wife, Victoria, is an exhibition researcher for historical exhibitions, working with the Imperial War Museum and the Titanic Experience in Belfast to make history accessible to the public. A model for them was Turtle Bunbury’s History Festival of Ireland which ran in Carlow in 2012 and 2013, but the key inspiration was the Chalke Valley History Festival, which attracts large crowds to Wilshire’s Chalke Valley each year for a week of discussions, debates and immersive living history.

“Chalke Valley Festival is like the Glastonbury of history festivals,” says Kingston. “It began as a fundraiser for the local cricket club and now has tens of thousands flocking to it. They do clever things, like have living historians dressed up in period costumes re-enacting battles and historical debates, and a version of BBC Radio 4’s The Long View, which takes a contemporary subject and looks at the echoes of it in historical terms, the pre-configurations of current situations. It’s like a carnival of history.”

The inaugural West Cork History Festival will be a more modest affair, with a single marquee in the riding area behind Rosebank house and a second stage in a secret garden. A central focus will be the deeds of various informers, murderers, double-crossers and looters in the West Cork region, with three separate events exploring the harrowing murder and disappearance of 13 Protestant men and boys in and around Dunmanway in April 1922. This dark event by a rogue IRA group in revenge for the killing of one of their men as he was breaking into a house to steal a car from a Protestant family, has led to more recent ructions since an RTÉ documentary aired new revelations in 2009 and The Irish Times named one of the killers in 2014. Who exactly were these murderers and are their descendants still living locally? Did it play a part in the stark exodus of Protestants from west Cork in the 1920s?

Eoghan Harris explores the issue from the perspective of Canon George Salter who has served as a Church of Ireland minister in Cork city for most of his life. Just seven years ago, Canon Salter finally broke his silence to reveal how his father, William Salter, was warned to flee for his life after the massacre of neighbouring Protestants. “Bill boy, you best be gone by morning,” he was told and he left, along with his six sisters and two brothers who all fled as refugees to England.

William Salter was the only one ever to return to Cork, where Canon Salter was born in 1925. He has played a key role in the Irish language movement and after a life of ministry in Cork city he realised it was time to reveal his story so that both sides of the community could heal. The documentary, An Tost Fada (The Long Silence), which Harris made about the incident will make for difficult watching in west Cork.

Airing issues of such sensitivity adds a touch of truth and reconciliation commission to the festival, though other talks and events about tower houses and Feniansim should be less intense. There are unlikely to be many obvious descendants of the hundreds of pirates that occupied the West Cork coastline in the 17th century, which is the topic under discussion by Dr Connie Kelleher, an underwater archaeologist who spends much of her time investigating shipwrecked galleons and ancient naval vessels.

The lapse of time makes the unscrupulous activities of these sea mercenaries easier for the community to deal with, though the likelihood is that some of the locals are descendants of swashbuckling piratical offspring, sired by the almost one thousand pirates and their harem of prostitutes who took over the coastline between 1603 and the 1630s, following the imposition of restrictive regulations by the court of James I.

And while Kelleher will not be offering DNA testing to clarify people’s piratical lineage, she may reveal the remains of secret cliff ladders and caverns that still exist along the coast from Roaring Water Bay to Dingle for bringing pirate booty ashore, and the hollows for lanterns used as a clandestine navigation system to outwit authorities.

Shifting the focus away from Cork a little bit, the English historical broadcaster and journalist Dr Dominic Selwood will discuss the activities of The Knights Templar in Ireland, particularly in the Norman stronghold of the southeast. These Crusader warriors in their white mantles emblazoned with a red cross are mostly associated with defending pilgrims on the way to Jerusalem and best known from their depiction in The Da Vinci Code and The Life of Brian. They played a key role in 12th and 13th century Norman Ireland, until their suppression under a Papal-led inquisition in St Patrick’s Cathedral in 1309 where they were accused of spitting on the cross, homosexuality and worshipping idols.

Finally, on a different tangent, the British politician and novelist Michael Dobbs will refocus history on the present moment with a discussion about modern conspiracy and duplicity through the guise of his book and subsequent TV series The House of Cards in a talk entitled “Life, Lust and Liquor: how House of Cards wrote itself”.

“The aim is not to be contentious,” says Kingston, “but to illuminate, to use history to better understand the present or prepare for the future. There seems to be a hankering after that connection with things historical now. It might just be as a new form of entertainment, but it’s interesting that sitting listening to people debate or talk about things is very low tech. It is a curious reaction against, or seems in curious tension with, the other ways we seek entertainment these days. If it attracts an audience and people seem enthusiastic about it we will try and do it annually.”

It’s hard to gauge an inaugural festival, but it’s likely to be a provocative and engaging weekend, worthy of the eternity it takes to reach west Cork from anywhere at all, and if you happen to be in the area already it might offer relief from the incessant summer sailing regattas.

Have you a moral duty to care for others?
9