Commemoration controversy: Who were the RIC, DMP, Black and Tans, and Auxiliaries?

Why was the commemoration so contentious and why was it really cancelled? 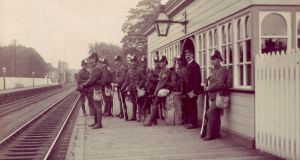 RIC men on wait on an unidentified station platform.

What is this week’s commemoration controversy about?
The Minister for Justice Charlie Flanagan had proposed to host a commemoration service for members of the Royal Irish Constabulary (RIC) and Dublin Metropolitan Police (DMP) who served between 1836 and 1922.

It was scheduled to be held in Dublin Castle on January 17th and addressed by him and the Garda Commissioner Drew Harris.

What were the RIC and the DMP?
The RIC was an all-Ireland police force. It was armed. The DMP was an unarmed police force that operated in Dublin. Between them 90,000 policemen served in both forces, the majority of them Irish Catholics.

Why hold a commemoration for them?
The Minister for Justice Charlie Flanagan maintained most of these men were ordinary Irishmen doing the job that policemen everywhere do and they had been unfairly treated by Irish history.

What is all the fuss about?
Those who objected to the commemoration stated that both police forces were in the vanguard of British attempts to oppose the IRA during the War of Independence.

They say the RIC was also involved in atrocities most notably the murder of the Lord Mayor of Cork Tomas MacCurtain in March 1920.

What has all of this got to do with the Black and Tans and the Auxiliaries?
The Black and Tans were special constables recruited in Britain at the end of 1919 and 1920 to bolster the RIC and DMP, who were struggling with a boycott of the police and with mounting attacks by the IRA.

The Black and Tans and the Auxiliaries were mostly drawn from the ranks of ex-servicemen who had fought in the first World War. They began to arrive in Ireland in March 1920.

They were called Black and Tans because their uniforms initially were half-black (RIC) and half-khaki (British army), symbolising that they were half in the RIC and half out.

The Auxiliaries were an elite force of former British officers recruited to take the war directly to the IRA. They wore their own uniforms. They became known as the Auxiliary Division of the Royal Irish Constabulary (ADRIC).

Both forces were involved in reprisals against locals. They burned creameries and business premises around Ireland. They were involved in the notorious attacks on Balbriggan and the burning of Cork in December 1920. Those who opposed the commemoration state that it is impossible to separate the activities of the RIC/DMP and the Black and Tans/Auxiliaries during the War of Independence, as they were all on the same side in opposing Irish independence.

The postponement has led to a welter of recrimination, with the Taoiseach Leo Varadkar stating that it will do nothing to advance the cause of a united Ireland.

What happens now?
The minister is adamant that the event has been postponed, not cancelled. He says the postponement will allow for a period of reflection, but there is an election coming, and there is no guarantee Fine Gael will be in power after the election.

And Fianna Fáil leader Micheál Martin, who has been critical of the Government’s approach on this issue, has indicated that he is in favour of a ceremony that remembers all who died in the War of Independence.

This is what the Government’s Expert Advisory Group on Commemorations has suggested too. It remains to be seen how this will be done without sparking off another round of recriminations.