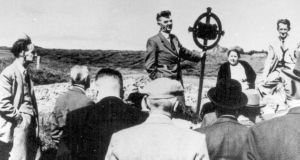 Tom Barry, the most famous IRA commander during the War of Independence and the mastermind of the Kilmichael ambush, addresses some of his old comrades at a memorial service in 1966

Cork was the most active county in Ireland during the War of Independence, accounting for more than 500 fatalities. In absolute and relative terms to population, it had more dead than any other county.

The terrain west of Cork city was ideal ambush country with high hedges, high ground and narrow roads. It was also home to some of the most determined IRA commanders of the war.

The largest ambush of the War of Independence happened at Kilmichael between Dunmanway and Macroom on November 28th, 1920, a week to the day after Bloody Sunday, in which 12 British intelligence officers were shot dead and the British military retaliated by shooting dead 14 civilians at a match in Croke Park.

At Kilmichael, 16 auxiliaries were killed by a flying column led by Tom Barry, a British army veteran of the first World War.

Three IRA men, Pat Deasy, Michael McCarthy and Jim Sullivan, were also killed. The last two, who died at the scene, were allegedly killed following a “false surrender” by some of the auxiliaries, as alleged by Barry years later.

Deasy died at 10pm that night at the home of a woman in Gortrae. The bodies of the three were buried in a bog that night, as locals feared the auxiliaries would carry out reprisals. Temporary coffins were made. Charlie Hurley, the officer commanding the 3rd Cork Brigade (West Cork) of the IRA, ordered permanent coffins to be made by a local carpenter. They were brought to a disused house two days later.

The bodies of the men were dug up a day later, and they were secretly carried to another location. They were not buried properly until December 3rd, when they were buried in Castletown Kinneigh in the middle of the night.

Barry fought a long and ultimately successful battle against the Military Service Pensions Board for a pension which reflected his service.

He claimed that as a deputy divisional officer commanding, he was effectively in charge of all the IRA active service units in the counties of Cork, Kerry, Waterford and west Limerick.

He applied for a pension at Rank A, the highest award available for service during the revolutionary period.

When the board instead awarded him Rank B in 1940, Barry was indignant, stating that it made him feel “ashamed” and humiliated.

Cork also saw the biggest reverse of the War of Independence for the IRA, when Crown forces surprised an active service unit which had assembled at a house in Clonmult on February 20th, 1921.

Twelve IRA men were killed in the ambush and two others were later executed.

There were numerous pension claims by the dependents of the men who were killed, including William Galvin, the father of James Galvin, who was with the 4th battalion (1st Cork Brigade, Southern Division).

A letter in his pension file from Col Pat Murphy of the Irish Army stated that Galvin was executed after surrendering along with the others. “They were lined against a wall outside the house. While standing in this position the men were fired on and bayoneted by the British.”

William Galvin was subsequently dismissed from his job as a telephone operator in the British naval base in Haulbowline. He was awarded a gratuity of £100.

Twelve IRA men were killed in the ambush and two others were later executed.

The IRA attacked a convoy of vehicles at Clonbanin which is close to the border with Kerry.

“The difficulty of successfully ambushing the British became apparent. British columns travelled in such strength and with such precautions to render them almost impervious to attack.”

The IRA units involved managed to escape without any casualties.

One of the most efficient and ruthless women involved in intelligence during the War of Independence was Josephine O’Connor the widow of a British soldier killed in the first World War.

She was living in Wales and moved back to Ireland to look after her dying father. She remained on in Ireland after her husband Coleridge Marchment was killed in October 1917 during the Battle of Ypres and got a job as a secretary in Victoria Barracks in Cork.

The British did not suspect a war widow would be a spy, but Marchment, as she was then, passed vital information on to the Cork brigades of the IRA. In return, Florrie O’Donoghue, the IRA intelligence officer, led a mission to Cardiff to kidnap her sons, Reggie and Gerard, after her late husband’s family refused to hand them over.

In return she provided vital information to the IRA about the actions of the Sixth Division of the British army which was fighting the war in Cork. In her statement for a military pension, O’Donoghue said she was responsible for passing on information which led to the execution of three British spies and six civilians.

Her intelligence was used to target the homes of British officers based in Ireland. She also passed on information about troop movements which led to the Upton ambush on February 15th, 1921 in which the IRA attacked a train carrying British soldiers. It turned out to be a disaster as six civilians were killed and two IRA volunteers when men from Cork 3 Brigade opened fire at Upton Station.

In her successful application for a military pension, she stated: “There was scarcely a working day in the whole period on which some item of information, big or little, was not passed on to the IRA”.

She and Florrie O’Donoghue became romantically involved and were eventually married. They had four children of their own along with her two sons from her first marriage.

G Company, (6th battalion, Cork I Brigade, Southern Division) lists eight men who participated in the execution of Maria Lindsay and her chauffeur James Clarke, among the most famous executions of the War of Independence.

Mrs Lindsay was accused of giving away the position of IRA volunteers waiting in ambush at Dripsey crossroads, 20 kilometres west of Cork city.

She was targeted by the IRA for revealing to Crown forces that an ambush was imminent in the area. Ten IRA men were arrested. Five were sentenced to death.

The IRA later burnt Mrs Lindsay’s family home, according to Frank Busteed, who was in charge of both operations and who was awarded a pension for his efforts.

In his application, Busteed, the officer commanding 6th battalion (1 Cork Brigade), said the military “came in their thousands” into the area in search of Mrs Lindsay and Mr Clarke. “The result was it gave our column all they could do to keep out of the rings around us.”

He was eventually awarded a disability pension for six and a third years’ service.

The Ballinspittle company (1st battalion, 3 Cork Brigade, Southern Division) admitted it carried out little in the way of offensive action against Crown forces.

Each time the company sought to engage the enemy, the enemy did not turn up, according to the company account in the files of the 3 Cork Brigade.

“It is obvious there was something radically wrong, but unfortunately the cause of the company’s misfortune was not discovered until too late to be of use.The discovery was made that the 2nd lieutenant of the company, Madden, by name, was giving the game away over a long period.”

He was identified in the Bureau of Military History files by Denis Collins, a lieutenant in the Ballinspittle company, as John Madden.

Unlike the 78 other spies executed by the IRA in Cork during the War of Independence, Madden left the county before he could be traced.

Collins told the Bureau of Military History: “Madden sold his farm and disappeared from the area during the truce. Still, if he was responsible for giving away the game on a number of us, nevertheless, I was always thankful that no lives were lost among us as a result of his treachery.”

The Bandon company (1st battalion, 3 Cork Brigade) wrote about its experiences of operating in the town with a large loyalist presence and 300 ex-British service men. “It can be said that the atmosphere was anything but congenial for the activities of the men of the company. Bandon was a town occupied one might say by the direct descendent of the Planters.”

An account of the Crossbarry ambush, the nearest thing to open warfare in the War of Independence, is contained in the Brigade Activity Reports for the Clogagh company (1st battalion, Cork 3 Brigade, Southern Division).

Crossbarry occurred on March 19th, 1921, when the British military tried to encircle Tom Barry’s column, which had wiped out the auxiliaries at Kilmichael.

Barry’s column successfully fought its way out of the trap using local knowledge to escape the British. Nine British soldiers and a RIC driver were killed at Crossbarry, along with three IRA men.

The Clogagh company report states: “After a brief but fierce engagement, the column gained complete victory with almost the entire enemy force being annihilated. Scarcely was the fight over when another enemy party presumably that which has shot Brigadier Charlie Hurley earlier in the day at Ballymurphy appeared on the scene. A few well-directed volleys had the effect of scattering this new force.

“Later on, the same event at the column encountered yet another British force, but this too was put to flight after which the victorious IRA men continued their march uninterruptedly until they reached the Enniskeane area the following morning.”