Tipperary, 1919: The woman who hid Dan Breen after Soloheadbeg ambush

The Tipperary files: Marian Tobin cited written testimonial from both Breen in her application for a military pension 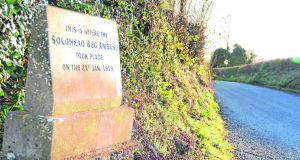 The site of the Soloheadbeg ambush: The ambush site is approximately 300m from Soloheadbeg quarry. Photograph: Ronan McGreevy

The War of Independence began with the shooting dead of two Royal Irish Constabulary policemen at Soloheadbeg, Co Tipperary, on January 21st, 1919.

Constables James McDonnell and Patrick O’Connell were escorting a consignment of gelignite to Soloheadbeg quarry outside Tipperary town when they were ambushed by eight men from the 3rd Tipperary Brigade.

The attack, which was not sanctioned by the Irish Volunteers leadership, resulted in general outrage and made the ambushers the most wanted men in the country.

They were on the run for months after that until the youngest of their number, Seán Hogan, was arrested at a dance in Tipperary in May and later rescued from a train at Knocklong Station after a shootout.

The woman who sheltered Dan Breen and Seán Treacy, the two most famous ambushers, after Soloheadbeg was eventually awarded a military pension.

Marian Tobin from Lansdowne Park in Limerick cited written testimonials from both Breen and his commanding officer Séamus Robinson in her application for a military pension.

In a letter written in 1950, Breen wrote in praise of Mrs Tobin, saying it was she who sheltered him and the others involved in the ambush for several days “while the area was very hot”.

Breen praised Tobin and described her as “one of the best workers we had from 1917 to 1923. There are few woman and not many men who gave more help than Mrs Tobin”.

Corroborating information relating to her home being used as a safe house was provided to the Pensions Board by Robinson.

Tobin had been the first person to receive with “open arms and encouragement” the men who carried out the Soloheadbeg ambush, he stated.

Breen brought much of the same querulous spirit he displayed in the War of Independence and on the Treaty side in the Civil War to his quest for a military pension.

His is one of the biggest files in the whole collection, numbering some 800 pages. He chafed at the demands for proofs of his involvement in the independence struggle, particular since his book, My Fight for Irish Freedom, had been a bestseller.

“I should imagine my case would not require months to investigate as the back numbers of the Daily Independent would give the proofs needed,” he wrote to the Pensions Board in 1924.

Breen gives a long list of wounds he incurred during the War of Independence. In May 1919, he was shot through the right side and arm during the Knocklong ambush.

In December 1919, he was wounded in the left leg and head at Ashtown in the Phoenix Park when he and other volunteers attempted to assassinate the lord lieutenant of Ireland, Field Marshal Sir John French.

Breen also listed a shrapnel wound incurred in May 1920 in Tipperary and one incurred during a failed ambush on British military tenders in Whitehall, Dublin, on October 12th, 1920, when he was hit through the left leg, right thigh and right hand. “How many men were wounded and suffered as much as I did? How many were wounded six times and still came back for more?” he asked.

He appealed this decision on multiple occasions and for many years. He argued with the board that his condition was getting worse and that the original designation should stand.

In 1932, a change of government brought a change of fortune. It was agreed that Breen should receive a wound pension of £150 per annum and treatment in St Bricin’s Hospital in Dublin.

At that stage, Breen had spent several years in the United States after losing his seat in the 1927 general election. He received medical treatment there for his wounds. He returned to Ireland in 1932 and was re-elected to the Dáil.

Breen wrote to the minister for defence Frank Aiken in 1933 warning him: “I may not live another year and at the outside two years.” He lived for another 37 years.

In June 1939, Breen submitted expenses for the time he was in the United States between July 1929 and January 1932. He claimed for receipted expenses of $12,208 (€182,000), an enormous sum for the time. He also included references from the doctors who treated him in New York.

In 1940, Breen was given a pension of £160 a year for wounds. In addition, he was awarded a military service pension at the highest grade possible, an A grade, for nine years of service at £225 per annum.

He was unimpressed with the refusal of the State to fund his treatment in the United States. However, some £3,000 in expenses was refunded to him in 1948.

Jim Stapleton from Upperchurch, Co Tipperary, admitted he was the man who shot District Inspector Michael Hunt in June 1919. Hunt, who was gunned down on the streets of Thurles, was the first policeman to be deliberately targeted in the War of Independence for assassination.

In his pension claim, Stapleton also stated he was involved in the operation which saw the shooting dead of another RIC man in the village of Ragg in March 1920 and the killing of District Inspector William Wilson in August 1920. Stapleton received a military pension for his service.

Tipperary was one of the most active counties in the War of Independence and also one of the deadliest for the RIC. Some 46 RIC men were killed during the war in the county, according to serving garda and author John Reynolds. Many others were injured.

One of them was Constable Daniel McCarthy, who was shot and injured in Nenagh on November 4th, 1920.