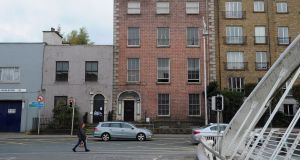 Plans to turn the James Joyce “House of the Dead” on Dublin’s Liffey quays into a 56-bedroom hostel have been lodged with Dublin City Council.

The Georgian house at 15 Usher’s Island, the setting of Joyce’s short story The Dead and one-time home of the writer’s great-aunts, was sold almost two years ago for €650,000.

The estate agency handling the sale, QRE, had expected interest from Dublin City Council or the Office of Public Works, but neither bid for the historic building and it was sold privately. It is colloquially known as the House of the Dead due to its association with the story featured in Dubliners, a collection of short stories published in 1914.

Property investors Fergus McCabe and Brian Stynes are now seeking planning permission to turn the protected structure into a hostel with a cafe at basement level. The plans also seek the demolition of a two-storey 20th-century extension to the rear of the building and its replacement with a new four-storey extension to house offices and bathroom facilities.

Described by Joyce as the “dark gaunt house on Usher’s Island” number 15, which faces James Joyce Bridge on the south side of the Liffey, was built in about 1775 for Joshua Pim, who had his business next door at number 16.

In the 1890s the upper floors were rented by Joyce’s maternal great-aunts, who ran a music school and, most notably, held the Christmas parties that provided the scene for The Dead.

During the course of the 20th century, the house fell into increasing disrepair. Its top floor was removed as an alternative to repairing the roof, and its interiors were vandalised and occupied by squatters.The building was almost lost to fire in the mid-1990s, and firefighters tackling the blaze had to break most of its remaining windows.

The house was boarded up and remained in a derelict state until 2000, when it was bought by Dublin barrister and quantity surveyor Brendan Kilty. He refurbished the building over a four-year period, recreating Victorian interiors in some rooms which have since been used for Joyce-related events, including re-enactments of the Christmas dinner scene from the short story.

In 2012, Mr Kilty filed for bankruptcy in the UK, with debts including £2.1 million (€2.34 million) owed to Ulster Bank in relation to the Usher’s Island house. The house was sold in 2017 on the instructions of receivers.