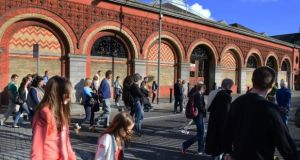 Market traders have appealed to Dublin City Council not to turn the city’s Victorian fruit and vegetable market into a “fast food” hall or “elitist” tourist attraction.

The council is next month expected to seek bids for the redevelopment of the market between Capel Street and Smithfield which closed in August after 127 years of wholesale trade. Dublin financier Nick Corcoran of Cardinal Capital this weekend said he would make a bid to develop the market with a focus on “independent food producers”.

Traders have urged the council to ensure it protects the integrity of the traditional produce market and not to go down the route of creating a market dominated by “grazing” and take-away food outlets.

“The market must have a municipal function. If you turn it into a grazing market or a tourist market with people walking around eating their burgers and noodles you will kill the retail market,” said Toby Simmonds of the Real Olive Company in the English Market in Cork.

“I fear there will be an emphasis on tourism and on food consumption on the premises to the detriment of providing a very solid foundation to buy and sell fresh foods.”

He said the Borough Market in London was now trying to “correct the path it has taken where it has ended up dominated by fast-food offerings”.

“They are now limiting this aspect, and also corralling it into a separate remote area of the market.”

While a limited “food-to-go” or restaurant offering could be accommodated in the market, Mr Simmonds said it must be kept to a minimum. “This type of business can survive adjacent to the market, within commercial rents, whereas the reality is the traditional activity of market trading cannot.”

Mr Simmonds, who runs Toons Bridge Dairy near Macroom, Co Cork, concedes he had an interest as he would like a Dublin outlet for his produce. He also believed the market should not be run at “arms length” from the council or it could become an “elitist, overpriced private concern” .

Jenny McNally, of McNally Family Farm, an organic vegetable business in north Dublin, has operated a stall at the weekly Temple Bar outdoor market for 22 years, and said traders would be delighted to have an indoor facility.

“It would be great to have a covered food market and to get out of the elements. It’s something that has really been overlooked in a capital city.”

She said visitors to European cities wanted to see local produce, but it should ultimately be a market for the people of Dublin.

We can’t have a situation where this is solely motivated by profit. It must be a municipal market with Irish produce

“Temple Bar is packed with people coming to get their produce for the week. There isn’t enough room to move around, so I could see the indoor market, which has the Luas running right beside it, being really successful. If you get a few producers together you would be surprised at how quickly the space will fill up if the rent is reasonable.

“People make money if they have a route to market for their produce where they can sell directly. It could be an absolute food paradise.”

Social Democrats councillor Garry Gannon said he would be pushing for councillors to have an input into the tender for the market before it was issued.

“We can’t have a situation where this is solely motivated by profit. It must be a municipal market with Irish produce from local and national traders.”