Newgrange discoveries have ‘truly transformed’ our understanding of ancient site

Crowds gather from early in the morning to celebrate the winter solstice at Newgrange, Co. Meath. Video: Alan Betson 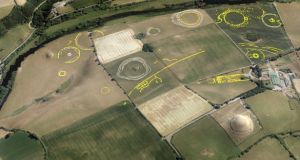 A GIS generated terrain model of the Newgrange flood plain at Brú na Bóinne showing the principal archaeological sites from the 2018 aerial survey.

The full scale of archaeological discoveries at Newgrange revealed by the summer drought has been described as “staggering”.

A series of “immense” timber palisade (wooden fences) walls measuring nearly a kilometre in length enclosed a vast ceremonial area which was used for mortuary rituals.

Large ceremonial henges and enclosures of timber uprights indicate that the the Newgrange site was used for ceremonial purposes several centuries after the construction of the world-famous passage tomb and mounds.

Archaeologists now believe that the Newgrange site was “sanctified” by the original passage tomb which made the site a place of pilgrimage for the generations that came afterwards.

The passage tombs dates from 3,200BC, but the wooden structures that were uncovered during the summer probably date from 2,900BC, three hundred years after that.

The Department of Culture, Heritage and the Gaeltacht has published the interim report into the discoveries of last summer which first emerged from drone shots were taken of the parched earth.

The publication is to coincide with the winter solstice where the sun illuminates the passageway in the Newgrange passage tomb.

That discovery prompted international headlines given that Newgrange and the surrounding Brú na Bóinne is a Unesco World Heritage Site.

The archaeological report by Tom Condit and Mark Keegan said the discoveries have “amplified in a dramatic fashion what some archeologists would have broadly suspected but could never have imagined”.

They added that the understanding of the ritual landscape of the Newgrange floodplains has now been “truly transformed”.

They say the structures which were uncovered by the drought were made of timber and the patterns left in the soil is where the timber posts were hammered into the ground.

They believe that the Newgrange passage tomb was enclosed by a series of palisades (wooden fences) and that the whole area was sacred. It was probably intended to be a long mortuary enclosure of a kind which has been discovered in Britain but not in Ireland.

The discovery indicated that there was a huge four poster rectangular structure in the area which may have acted as a place where funeral and mortuary rites took place.

The photographs revealed a site of “great importance in our understanding of the Late Neolithic” (3,000BC- 2,500BC), the archeologists suggest.

Heritage Minister Josepha Madigan said the discovery and the early interpretive work of the photographs would act as a “significant reinforcement” of the site’s Unesco World Heritage status.

“These discoveries will inspire much interest and will attract further research and interpretation,” she said.

“My Department looks forward to working with the landowners and academic institutes and researchers in the years ahead on ensuring the secrets these sites still hold are revealed.”

Many were features identified through crop-marks or scorch-marks which had become visible on account of the conditions.

Among them was a previously unknown henge (a circle of stone uprights) near Newgrange which was discovered by Anthony Murphy with the use of a drone and which attracted international attention.