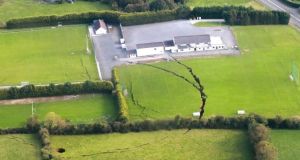 The emergence of a nine-metre sink hole in Co Monaghan has led to a road closure.

The hole was found on land belonging to Gyproc, an Irish plaster and plasterboard manufacturer.

Last September, a sink hole the size of a football pitch opened up at the nearby Magheracloone Mitchells GAA club, causing other road closures as engineers examined the causes.

A report into that incident found that recent operations in an old part of a mine involving the transport and storage of water had led to the collapse.

On Thursday evening a statement from Monaghan County Council said another hole had been discovered and that it had decided to close the local LP4900 road at Drumgossat, Magheracloone as a precautionary measure.

The sinkhole is located 35 metres from the road. Diversions are now operating to the school and church and the road will remain closed until further notice, the council said.

The R179 regional road between Carrickmacross and Kingscourt is unaffected and remains open.