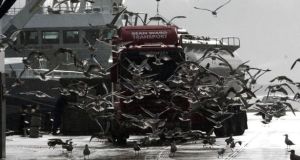 Seagulls gather around a boat unloading its catch in Killybegs. Photograph: Brian McDaid

EU fisheries ministers meeting in Brussels reached agreement early this morning on next year’s fish quotas, amid continuing uncertainty over the impact of Britain’s withdrawal from the Common Fisheries Policy.

The deal, which Minister for Marine Michael Creed has described as “balanced”, includes an overall increase of 30 per cent in Ireland’s quota for whitefish, a 20 per cent cut in Ireland’s mackerel take, and increases of 35 per cent in Atlanto-Scandian herring and 18 per cent in western horse mackerel.

The Killybegs Fishermen’s Organisation (KFO) has described the outcome as “generally positive”, while environmental groups have criticised the ministers for disregarding scientific advice.

Sustainable fishing limits must be set by 2020, environmental law charity ClientEarth warned, and its science and policy adviser Jenni Grossman said that politicians were “delaying stock recovery , and risking even more painful cuts next year”.

Quotas for Ireland’s key species of prawns in fishery area VII have been cut by 32 per cent. However, industry representatives say this has been offset by agreement that vessels will be exempted from the full impact of the landing obligation, where fish cannot be discarded at sea.

KFO chief executive Sean O’Donoghue described the quotas secured for Ireland as “very significant wins”, reflecting “ the importance of the industry working towards an overall sustainable outcome for the sector.”

Mr O’Donoghue also welcomed a “workable solution” to the obligation to land all fish rather than discard by January 2019, which has been phased in over successive years.

“The Implementation of the landing obligation, as laid out in the Commission’s proposals, would have had large negative consequences for Ireland’s whitefish and pelagic sectors as the “choke species” factor could have triggered the closure of most fisheries in the early months of 2019,”Mr O’Donoghue said.

“Choke species” is a term used to describe a species of fish with a low quota which can cause a vessel to stop fishing if caught in the net - even if the vessel still has quota for other species in the same area.

“The prospect of “choke species” paralysing the Irish fishing industry was a very credible threat with knock-on effects for a vast array of sustainable fisheries,” Mr O’Donoghue said.

“I am glad to say the EU Council has adopted a workable solution to the “choke” situation with the allocation of by catch quotas to the Member States for the five stocks where a zero total allowable catch was set,” he said.

Meanwhile, Mr Creed has described some of the commentary on EU negotiations on fish quotas as “misinformed”.

None of the concessions agreed was outside scientific advice, he said. Mr Creed told RTÉ’s Morning Ireland that some commentators would appear to prefer to see “rusting fishing trawlers tied up in ports”.

However, the policy officer of Bird Watch Ireland, Fintan Kelly said the deadline to end over-fishing in 2020 was being ignored. It had been known for five years, but no efforts had been made to introduce measures progressively or incrementally.

He also expressed concern about a new measure to end the discarding of dead fish. This will mean that all fish caught at sea will have to be landed and processed irrespective of size. Traditionally smaller fish have been discarded at sea.

“This is a deeply disappointing result,” said Mr Kelly. “Juvenile fish will be processed into fish meal for use in agriculture. It is not entirely clear the impact this is going to have.” Mr Kelly also expressed concern that monitoring and control levels will not be maintained.