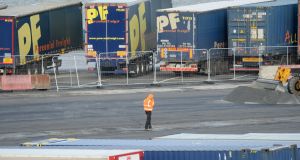 The loss of the Irish Ferries services between Rosslare and France next year could severely impact Irish, Spanish and French exporters of fresh fish and shellfish harvested in these waters, it has been claimed.

John Nolan, Castletownbere Fisheries Co-op manager, said people working in the industry were “already losing sleep over Brexit” but that the Irish Ferries announcement was “one more blow we didn’t anticipate”.

Castletownbere in west Cork is Ireland’s largest whitefish port, and a hub for foreign and Irish landings of stock caught off the coast.

The Castletownbere co-op, along with Spanish vessel owners, relies heavily on the Rosslare link to Europe, served by both Stena Line and Irish Ferries.

“I estimate about 2,500 lorries leave Castletownbere annually with fresh fish for the French and Spanish markets, using Rosslare and Cork,” Mr Nolan said.

Mr Nolan estimates that an additional 300 trucks take landings from Dingle, Co Kerry to Europe on the same routes.

“We do have Brittany Ferries from Cork to both Roscoff in France – and its new route to the Spanish port of Santander – but the priority on the French route is tourism during the summer,” he said.

“So having Irish Ferries from Rosslare has been very valuable to us, particularly as the trucks from Castletownbere often arrive in Co Wexford with just 15 minutes to spare. Having to take another hour at least to reach Dublin Port would not be viable.”

French and Spanish fleet owners landing into Castletownbere, nicknamed the “peseta port”, will also be affected. There has been a 319 per cent increase in landings by EU vessels into the west Cork port since 2010.

Overall, landings into Castletownbere increased by 60 per cent in volume and 232 per cent in value between 2010 and last year, and were worth almost €100 million in 2016, according to Bord Iascaigh Mhara (BIM).

BIM said the main species sent via Rosslare are megrim, monkfish and some shellfish, and the southeast port takes about 10 per cent of overall seafood exports at 30,800 tonnes. It said Dublin handles some 90 per cent of seafood exports, but much of this is frozen container traffic of pelagic (mackerel and herring) and fresh salmon.