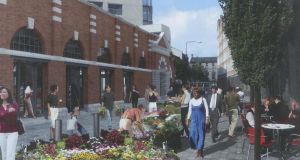 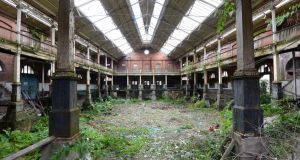 ‘While it is very badly damaged and will no doubt cost a significant sum to restore, it is hard to think of any other building in Dublin that merits such attention.’ Photograph: Dara Mac Dónaill/The Irish Times

This follows a conservation report commissioned by Dublin City Council which found the vacant building was “very badly damaged” and in need of €13 million in “essential structural repairs”.

The markets, in Francis Street, were built early in the last century by the Guinness family, to house street traders who had been displaced by the construction of the nearby Iveagh Trust housing development on Patrick Street, and were handed over in trust to Dublin Corporation.

The corporation, now the city council, continued to operate the market throughout the 20th century, but by the 1980s it had become very rundown and it eventually closed in the 1990s.

In 1996, the council announced it was seeking a private developer to regenerate the market. The following year Mr Keane secured the tender, with an agreement that title of the market would transfer to him once the redevelopment was completed.

However, the development became mired in an ownership row between the corporation and the Guinness family-controlled Iveagh Trust. The dispute was not resolved until 2004. Mr Keane applied for planning permission, which was granted by An Bord Pleanála in 2007, but before he could act on it, the recession hit.

In 2012, he secured a five-year extension of planning permission, which expired in 2017.

I would estimate I will be spending €50 million just on the market, as part of the whole spend of over €100 million

Mr Keane on Tuesday said he was in the final stages of preparing his application for what he is calling the Iveagh Markets Quarter which will see the development of a food market, restaurants, craft stalls and workshops, and a brewery and distillery in the old market building, along with two hotels and a hostel in the surrounding buildings including the old Mother Redcaps market.

Mr Keane did not wish to comment on the council’s report but said he had the necessary finances in place to undertake all required conservation and repair works and to develop and “authentic Irish market”.

“I would estimate I will be spending €50 million just on the market, as part of the whole spend of over €100 million.”

The council’s head of planning, Richard Shakespeare, said the council did not have the €13 million required for repairs in its budget. He said the “most efficient way” forward for the market would be for Mr Keane to redevelop it.

While many councillors have sought to bring the building back into council ownership, Independent councillor Mannix Flynn said the council should not be footing the bill for this project.

“Martin Keane should submit his planning permission and complete the development of this site. The council should not and cannot foot the bill here.”

The council did not have the wherewithal to develop the market, he said.

“The market is land-locked by the other properties Mr Keane has around it. If the council did take it back, they would find no takers if they put it on the market.”

The conservation and condition report by Howley Hayes Architects was commissioned after councillors voted in late 2017 to seek the return of the market from Mr Keane.

It said urgent repair work was required including “reversing the excavation”, which will be “particularly challenging, as will be the repair of the roof and external walls, including the rebuilding of the demolished sections of brickwork”.

However, it said the damage could be fully repaired.

“While it is very badly damaged and will no doubt cost a significant sum to restore, it is hard to think of any other building in Dublin that merits such attention, or which has the potential to be one of the city’s more attractive landmark buildings.”