From the archive: Looking back at one of the greatest nights ever in Irish cinema 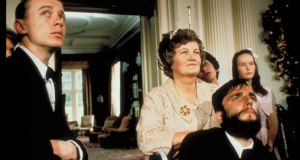 Brenda Fricker and Daniel Day-Lewis in Jim Sheridan’s 1989 film My Left Foot, based on the book by Christy Brown.

Tis the season to start thinking about what films will win which gongs. As awards season rumbles around at the dawn of next year, 2020 is also the 30th anniversary of one of the greatest nights ever in Irish cinema. Next March, we can reflect on what happened when an Irish film with a budget of under £2 million, My Left Foot, reinvented and reinvigorated Irish film.

In the arts section of The Irish Times on March 28th, 1990, a full page was dedicated to a remarkable night in Los Angeles at the Academy Awards. Michael Dwyer, the late Irish Times film journalist – the 10th anniversary of his death falls on New Year’s Day 2020 – was in the city reporting on the phenomenon that was this film.

“Irish film producer Noel Pearson was uncharacteristically muted as he made his way through the lobby of his West Hollywood hotel to the stretch limousine which was waiting to take him to his first Oscar ceremony,” one of Dwyer’s reports began. “‘I just wish it were over at this stage,’ he [Pearson] sighed, as he joined up with an equally subdued Jim Sheridan. Actress Brenda Fricker clearly was excited, and admitted she had put money on one of her rival nominees, Lena Olin.” Fricker was being tailed all day by a camera crew from Entertainment Tonight, who clearly felt she was in with more of a chance that she did.

“I don’t believe this,” Fricker said in her speech. Referring to Christy Brown’s mother, Fricker said, “Anyone who gives birth 22 times deserves one of these . . . I’m taking this very proudly back to Ireland.”

Dwyer wrote about Pearson perched on an aisle seat four rows away from the stage, his clothes soaked with perspiration as My Left Foot lost out in the best adapted screenplay and best director categories. Then Jodie Foster came on stage, and announced Daniel Day-Lewis had won a second Oscar for the film. “You’ve just provided me with the makings of one hell of a weekend in Dublin,” Day-Lewis said.

The My Left Foot winners, director and producer and others went on to the Beverly Hills Hotel. Ken Branagh, Steven Soderbergh (nominated for Sex, Lies and Videotape that year), and Michael Moore turned up “along with what seemed to be every Irish person who was in Los Angeles on the night,” Dwyer wrote, “including singers Bono and Bob Geldof”. The party continued at Irishman Billy Gaff’s house in Beverly Hills, where champagne flowed and partiers ate smoked salmon and Irish stew by the swimming pool.

Dwyer also wrote about the triumph of low-budget independent productions over the Hollywood studio blockbuster machine that year. Blockbusters including Born on the Fourth of July and Indiana Jones and the Last Crusade underperformed at the ceremony, with smaller films including Driving Miss Daisy, Dead Poets Society, Cinema Paradiso and My Left Foot winning.

Another happy cast member was the then-teenager Hugh O’Conor, who played the younger Christy Brown in the film. O’Conor went on to become an acclaimed actor, photographer and director of music videos, commercials and short films, and recently released his feature-length directorial debut, Metal Heart. O’Conor stayed up late to watch the ceremony, waking his father as Fricker and Day-Lewis won.

At the time, Day-Lewis was relatively unknown in the United States, having worked on My Beautiful Laundrette and The Unbearable Lightness of Being, but his buzz was building. “His chameleon temperament, commitment and obsession were also evident in My Left Foot when he refused to step out of character, even during meal breaks,” The Irish Times reported. “He spent weeks at the cerebral palsy clinic in Sandymount preparing for his role, and started researching for weeks before the money to make the film was raised.”

Fricker’s father, Des, was also pictured in the newspaper, with his daughter Gráinne and granddaughter Billie. Three years previously, the Irish Film Board had been abolished. “Government and institutional support for the film industry in Ireland has been all but non-existent,” the Irish Times media correspondent at the time, Ronan Foster, wrote. “Before the board was established in 1981, there had been a gap of 45 years since the production of an Irish feature film.”

The former chairman of the film board, Muiris Mac Conghail, failed to forecast what would become of Irish film, saying at the time that Irish films “have never been central to Irish culture” and “he does still not see the day when an Irish film will be made in Ireland with Irish money”. The Irish Film Board, now Screen Ireland/Fís Éireann, was re-established in 1993.

Rob Doyle’s favourite books: one for every week of the year
Real news has value SUBSCRIBE