From the archive: 50 boys and girls were brought to Tara Street Baths to be washed and sent away 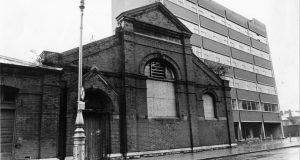 Tara Street Baths, where about 50 children had been brought to be washed and newly clothed before being sent to England, on October 23rd, 1913. Photograph: Tom Lawlor

“Deporting of Children to England: Remarkable development. Intervention of Roman Catholic Clergymen. Scenes at Tara Street Baths and Kingstown. Children Brought back to Dublin.” This was the headline on a report depicting extraordinary scenes in Dublin the previous day.

A scheme had been established to deport the children of strikers during the 1913 Lockout to English homes until the dispute was over. Bitterly opposed by Catholic clergy, the tensions depicted in the newspaper at the time showed the knock-on effects of the Dublin Lockout, which lasted almost five months.

About 50 boys and girls had been brought to Tara Street Baths on Wednesday morning to be washed and newly clothed and sent to England. Two women, Dora Montefiore and Lucille Rand, were identified as being in charge. As word travelled that a large number of children was being gathered to be sent to England, clergymen from the Presbytery of St Andrew’s Parish, Westland Row, made their way to the baths. “Here they found a good deal of excitement prevailing, many women appearing to now object to the sending away of their children.”

The clergymen began interviewing the children as they emerged from the baths, and “they elicited from the boys the frank admission that they were no lovers of the scheme to leave their homes”. The clergymen “addressed the parents and others who were about, impressing on them the risk of sending the children to unknown destinations, to people as to whose character they could have no reliable information”.

Parents were quoted in the newspaper on the day, such as a woman named Mrs Connolly, who said, “I live at 8 Moss Street with my husband who has been in delicate health, and was not working at his employment as a labourer. My little girl here who is 12 years of age, was sent to school this morning to the National School, Townsend Street, as usual. I heard she had gone to the Tara Street Baths. She was at Liberty Hall looking on at the crowd yesterday, when a lady came up to her and asked her if she wanted to go away, and she promised her to go to the Baths this morning to be sent away.”

The reporter wrote that the girl, now with her mother, was “weeping bitterly” as her mother delivered her statement.

Another mother, from Upper Gloucester Street, had given her consent to have her seven-year-old boy sent to England, but now regretted this and “wanted to get him back by the evening mail boat”. Asked why she gave her consent, she said that she thought all the children were going to be sent away. Another woman, Mrs McKenna, said that her 11-year-old daughter went to the baths that morning and had not been seen since. “The woman appeared to be in great distress, as she was told, she said, that the little girl had been sent away.”

Another child “who had been bathed in the Tara Street Baths, and who was rescued from the custody of the ladies who had charge of them by the crowd, was found to be suffering from a severe attack of measles”.

Later, in Dún Laoghaire, clergymen boarded a steamboat to remove children from it, some of whom came ashore. A priest, Fr MacNevin, made a speech to the passengers, “He declared that the boys were being taken away by trickery, fraud, and corruption to proselytisers without permission of their parents.” He accused those with the children of kidnapping, “and said he would see to it that Catholic children were not stolen from their parents and brought to a strange country where there was no guarantee as to what religion, if any, the children would be brought up in”.

That night, thousands of people descended on the pier at Dún Laoghaire, where it was rumoured 14 girls were being taken. “A scene of uproarious enthusiasm took place when the children came out of the police station. They were shouldered by the biggest men in the crowd, and followed by priests and people, numbering several thousands, were carried to Kingstown Railway Station. Amid loud cheers they were put upon the 9.20pm train and sent to Dublin.”

Dora Montefiore and Lucille Rand faced charges of kidnapping, but the charges were subsequently dropped.