Bloody Sunday 1920: Who were Michael Collins’s hit team ‘The Squad’? 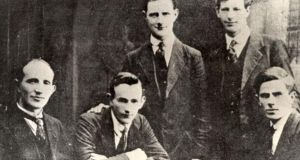 The so-called “Squad” was a group of assassins assembled by Michael Collins, several of whom played key roles in a series of assassinations on the morning of November 21st, 1920 – which would become known as Bloody Sunday, as a result of these killings and a mass shooting in Croke Park that afternoon.

By this time, the Squad had been in existence for more than a year. In September 1919, Collins gathered his most trusted men at a house in Parnell Square and gave them an impassioned history lesson. Previous rebellions had been undone by spies and informers, Collins told them. This one would be different.

Collins knew that the IRA could not win a conventional war against the British and that even an unconventional guerrilla war could be impossible, but what if all servants of the Crown in Ireland knew they could be personally targeted?

He cultivated a critical ally in Detective Eamon (Ned) Broy of the Dublin Metropolitan Police. Broy, who was sympathetic to the nationalist cause, had tipped Collins off about the so-called German Plot of 1918, when most of the leadership of Sinn Féin was arrested on a trumped up charge of colluding with the Germans during wartime.

In April 1919, Broy let Collins into G Division headquarters at Great Brunswick Street (now Pearse Street) for five hours. G Division was the branch of the DMP that monitored the activities of republicans.

There, Collins saw aisle after aisle of thick files on republican suspects including one describing Collins himself as coming from a “brainy family with advanced Sinn Féin sympathies”. Based on the information gleaned that night, G Division detectives were harassed and warned off their activities against republicans.

What became “the Squad” held a meeting in July 1919. Dick McKee, who would die in police custody on Bloody Sunday, and Mick McDonnell, the de factor leader of the Squad, gathered some of the most energetic young volunteers and asked if any had an objection to shooting men in covert operations. Most did. Conscientious objectors were sent on their way. The few that remained formed the basis of the Squad.

Their first victim was Det Sgt Patrick Smyth, who had given evidence against a prominent republican, Piaras Béaslaí, in court. Smyth, a father of seven, was ambushed near his home in Millmount Avenue, Drumcondra, at the end of July. Despite being shot four times, he lived for another month before succumbing to his wounds. After this, the Squad swapped their .38 pistols for more powerful .45 equivalent.

The Squad proper was formed in September of that year. Det Daniel Hoey of DMP G Division was killed that month followed by Det Michael Downing in October.

Though he would become the most famous member of the Squad, mostly because of his television appearances in latter years, Vincent (Vinny) Byrne did not join the Squad until November 1919. “Would you shoot a man, Byrne?” McDonnell asked Byrne. “It’s all according to who he was,” Byrne replied.

When the target was revealed as a man who raided Byrne’s home, he readily agreed. “That settles it,” McDonnell told him. That evening Det Sgt John Barton was shot dead outside police HQ in Great Brunswick Street.

In early 1920 members of the Squad escorted Alan Bell, a magistrate investigating the Dáil loan, off a tram and shot him dead.

According to Byrne, there were 12 full-time members of the Squad, including himself. They were Mick McDonnell, Tom Keogh, Jimmy Slattery, Paddy Daly, Joe Leonard, Ben Barrett, Sean Doyle, Paddy Griffin, Eddie Byrne, Mick Reilly and Jimmy Conroy. These became known in the historic parlance as “the Twelve Apostles”, but they were buttressed by other part-time members who participated in “jobs” as they were euphemistically called at the time.

The assassinations on Bloody Sunday were a product of Collins’s intelligence operation. Information was gathered informally by his men in places such as the Cairo Café (the British intelligence officers would later come to be known as “the Cairo Gang”) and Kidds Buffet at the junction of Grafton Street and Nassau Street.

Collins had another critical source of information. Elizabeth “Lily” Mernin worked as a typist in Dublin Castle and passed on the addresses of British agents. She became known as the Little Gentleman because of the initials she used in her correspondence Lt. G.

The Squad were accompanied on Bloody Sunday by officers from GHQ and members of the Dublin brigade of the IRA. The Squad may have been seasoned assassins, but many accompanying them were scared and sickened by the thoughts of what lay ahead of them. Charles Dalton, at 17, the youngest participant on Bloody Sunday, recalled “palpitating with anxiety”.

Fourteen men were killed and five injured on Bloody Sunday morning. Only one volunteer, Frank Teeling, was captured and he eventually escaped. It had been a huge success for Collins. The initial euphoria was quickly ended though by the events at Croke Park and the deaths of Dick McKee and Peadar Clancy that night.

Many of those involved had qualms about what happened. Christopher “Todd” Andrews was one of those sent out to execute Lieut William Noble at 7 Ranelagh Road. Much to his relief, Noble was not there. He admitted later that “killing a man in cold blood was alien to our ideas of how a war should be conducted”.

Others suffered greatly for their activities. McDonnell emigrated to California after the Civil War and developed a drink problem. Teeling too appears to have had serious mental issues, and killed two men after the Civil War. James Paul Norton was later committed to Grangegorman mental hospital, diagnosed with manic depressive psychosis.

Andrews also said, however, that without Collins’ intelligence operation, the War of Independence would not have been won. “For the first time in the history of separatism we Irish had a better intelligence service than the British. That was Michael Collins’s great achievement and it is one for which every Irishman should honour his memory.”

Seventeen Irish panto productions for all the family to watch this season
You Exist Too Much: A provocative and insightful debut