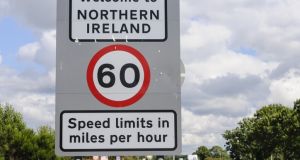 With Brexit looming, the growing clamour for a referendum on a united Ireland and calls to close the Border as a consequence of Covid-19, it is not history.

The Government of Ireland Act (1920), which became law 100 years ago today, remains one of the most relevant pieces of legislation ever passed in Irish history.

Through repealed as a result of the Belfast (Good Friday) Agreement, its ramifications are still with us in every discussion between North and South.

The act, which was given king’s assent (made law) on December 23rd, 1920, made partition official. With Brexit looming, the growing clamour for a referendum on a united Ireland and calls to close the Border as a consequence of Covid-19, it is not history. The constitutional conundrums it sought to resolve have never gone away. It remains current affairs.

It was, in effect, the fourth Home Rule Bill following on from the ones of 1886 and 1893 which were defeated and the 1914 Third Home Rule act which was given king’s assent but suspended for the duration of the first World War.

The 1914 act was unfinished business and it became a pressing concern following the signing of the Treaty of Versailles in July 1919.

In November 1919 the committee agreed to a proposal for two parliaments with a council of Ireland to discuss issues of mutual interest with a view to unity sometime into the future.

A month later the committee proposed a parliament for the whole of Ulster, but this was immediately opposed by Unionists who did not want the counties of Donegal, Monaghan and Cavan where nationalists had a clear majority.

“The inclusion of Donegal, Cavan and Monaghan would provide such an access of strength to the Roman Catholic party that the supremacy of the unionists would be seriously threatened,” Long wrote to Lloyd George.

The supreme irony of the 1920 act is that Unionists, who opposed the three Home Rule Bills with a fanatical zeal, some signing the Ulster Covenant in their own blood, embraced the new act with alacrity.

Edward Carson opined that Ulster Unionists could better control their own destiny by having a parliament of their own in a situation where they were in a permanent majority. If it was six counties unionists asked for, six counties it would be.

Nationalists, who had sought from 1870 to have a measure of Home Rule for Ireland, rejected the 1920 act with equal alacrity. The cheering crowds which had filled O’Connell Street in 1912 to welcome the third Home Rule Bill and its limited devolutionary powers, had been replaced by a sullen determination to break the link with Britain once and for all.

The success of Sinn Féin in the 1918 British general election and the destruction of the Irish Party, which had built its success on the pursuit of Home Rule, ensured the Government of Ireland Act (1920) could never be acceptable.

In March 1920 the Ulster Unionist Council supported the proposal as outlined by the Long Committee for a six-county parliament.

The Bill made its way through the House of Commons as the security situation in Ireland deteriorated.

The issue of Dominion status – independence within the British Empire – was first raised at the British cabinet in July 1920. This would cede control of defence to an Irish parliament and Lloyd George would not countenance it.

Long wrote to him in the strongest possible terms in words that would be uncannily prescient given what actually happened.

“Dominion home rule cannot be seriously regarded for the simple reason that it is impossible to grant it unless we are prepared to go the whole length and accept the inevitable conclusion namely, practical if not legal independence.”

Long, however, was prepared to go much further than previous Home Rule Bills and grant both jurisdictions full fiscal autonomy, but Lloyd George again rejected it until Sinn Féin agreed to talks. Sinn Féin refused.

Having attempted to solve one insoluble problem, the Government of Ireland Act 1920 created another leaving two significant minorities on both sides of the new Border.

King George V proroguing parliament on the same day the act became law expressed a hope that the people of Ireland “can, of their own accord, achieve unity. I sincerely hope that this Act, the fruit of more than 30 years of ceaseless controversy, will finally bring about unity and friendship between all the peoples of the kingdom”.

On Christmas Eve, 1920, The Irish Times, then the voice of southern unionism, in a prophetic editorial described the act as the “an unsought and unwelcome gift” which, nevertheless, could not be ignored.

“Whether we like it or hate it, this Act’s influence on the future course of Irish history must be enormous…We have not changed our minds concerning the merits of partition. The permanent partition of Ireland would be an unmitigated curse”.

As the historian Richard Murphy concluded: “In 1920 it satisfied Ulster, but the nationalists had waited too long for too little. To stigmatise the Government of Ireland Act and the Treaty of December 6th, 1921 which effectively amended it, as the root of subsequent Irish troubles is to ignore the fact that partition was the only option left if Britain was to withdraw from Ireland without coercing Ulster. Partition was the only way out of an otherwise insoluble problem.”

At the same time as the act became the law of the land, the British government was secretly negotiating with Sinn Féin through an intermediary, the Catholic Archbishop of Perth Dr Joseph Clune. These secret talks floundered on a demand by the British government that the IRA surrender its weapons before talks could begin.

Elections under the act took place, North and South, on May 24th, 1921. Unionists won 40 of the 52 seats in the North, beginning a majority hegemony that would last until direct rule in 1972. In “Southern Ireland” all 124 Sinn Féin candidates were elected unopposed and formed the second Dáil.

The Government of Ireland Act (1920) was swiftly rejected by nationalist Ireland as the British government expected that it would be. During the Anglo-Irish Treaty, Lloyd George bluntly told Arthur Griffith, one of the Irish delegation, that “you have got to face facts … we will not coerce Ulster”. The North was off the table.

Instead the Treaty delegation accepted in clause 12 a vague proposal for a Boundary Commission which would re-examine the Border “in accordance with the wishes of the inhabitants”.

The 1920 act was superseded by the Anglo-Irish Treaty in December 1921 which granted, what Lloyd George had promised he would never grant, Dominion status for Ireland.

The findings of the three-man Boundary Commission were leaked in 1925 and proved to be a profound shock for nationalists who had expected it would make Northern Ireland unviable by ceding so much territory to the Free State. The Irish Government accepted the remaining Border in return for a write-off of the Free State’s share of the Imperial debt.

The Anglo-Irish Treaty did not create partition; the Government of Ireland act (1920) did that. Most historians conclude that without the act there would have been no Treaty, no Northern Ireland, no Free State and no independent Irish state today though that was not the original intention of the act.

Partition remained and remains to this day.