Mystery of Sligo shipwreck solved 250 years after it sank 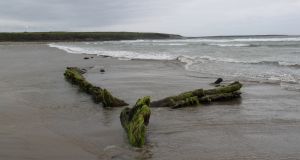 The mystery behind a well-known Sligo shipwreck has finally been solved, with researchers discovering 20 people died when it was swept out to sea 250 years ago.

Researchers at the National Monuments Service combined scientific analysis with historical archival materials to trace Streedagh Strand’s wreckage, known to locals as the ‘Butter Boat’, back to the early 18th Century in Yorkshire, England. The boat, now known to have been titled the Greyhound, was a coastal trading ship that travelled regularly between Britain and Ireland.

On this occasion it launched out of Yorkshire’s Whitby Port in December 1770, under the command of Captain Douthard, but it got into difficulty due to stormy weather at Broadhaven Bay, Co Mayo.

Investigators learned from historical accounts in the Freeman’s Journal that the boat anchored off the cliffs of Erris Head and the crew was forced to abandon the ship.

Later the crew realised a cabin boy had been left on board the vessel. Local volunteers from Broadhaven Bay, together with the Greyhound crew and the crew of a passing ship from Galway, attempted to save the boy. The ship, along with many of the rescue team, were dragged out to sea by the force of the storm and 20 people died on December 12th.

Locals, along with members of the National Monuments team, gathered at Streedagh Strand on Saturday to lay a wreath and remember the dead on the 250th anniversary of the ship’s sinking.

Minister of State for Heritage at the Department of Housing, Local Government, and Heritage, Malcolm Noonan, commended the National Monument team at his department for uncovering a detailed story.

“I know there is a huge amount of local interest in this wreck and that its identity has been a topic of debate for many years… I am very pleased that through archaeological investigation, scientific analysis and historical archival research our National Monuments Service has been able to finally confirm the wreck’s identity,” he said.

Mr Noonan said he is particularly struck by the value of folklore archives along with applied archaeological research in uncovering the full and tragic story of the Greyhound.