As the country reopens, cultural events will be last to come back – if they come back at all 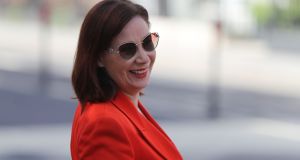 Minister for Culture, Heritage and the Gaeltacht Josepha Madigan. There is a legitimate fear that when it comes to crunch time in political negotiations and budgetary discussions, high-flown words about the importance of the arts are swiftly forgotten. Photograph: Nick Bradshaw

As the country cautiously starts to emerge from lockdown, with restrictions gradually being incrementally lifted on various activities, the airwaves and news pages have been filling up with voices representing various sectoral interests, usually seeking faster action or special treatment. Travel and tourism operators argue against quarantine regulations and restrictions on movement; restaurateurs and publicans look for social distancing guidelines to be reduced from two metres to one, and so on. It’s a completely predictable and legitimate phenomenon.

But, looking at the Government’s timetable for the next three months and beyond, and making some reasonable assumptions about how people are likely to continue to behave into the future in the absence of a vaccine against Covid-19, it’s hard to think of any part of the economy that will be hit harder and for longer than arts and culture.

Add in the fact that even at the best of times many artists and arts organisations teeter on the edge of insolvency, and you have a blueprint for a potentially catastrophic wipeout if action isn’t taken.

Artists will not be able to create, arts workers will be forced out and likely never return

“There will be an irretrievable loss of wisdom and skills, and any recovery will be a journey that many, if not most, in the sector will be unable to undertake or sustain,” the National Campaign for the Arts (NCFA) warned this week in a document proposing a range of measures to protect the sector.

“Artists will not be able to create, arts workers will be forced out and likely never return, arts organisations will close their doors, and Ireland’s artistic output will stagnate. If we allow the arts to be left behind as we move to rebuild Ireland, attempts to re-stimulate the arts and culture sector down the line will be unachievable.”

What sort of action needs to be taken? The NCFA has proposed 13 solutions to the challenge. It’s a sober – and sobering – piece of work, avoiding hyperbole while acknowledging the precarious condition of the economy as a whole.

Citing surveys by the Arts Council which estimate arts organisations will lose €2.9 million in income per month of shutdown, with the overall economic impact estimated at over €20 million (which seems conservative), it calls for an additional €20 million to be allocated to the Arts Council’s 2020 budget. Other proposals include ensuring the Pandemic Unemployment Payment (PUP) is continued for as long as possible while taking account of the particular ways in which arts workers are employed (this, presumably, a reference to proposals that the payment should be based on an individual’s earnings in the three months immediately prior to lockdown). The Temporary Covid-19 Wage Subsidy Scheme, it argues, should also be extended until it is financially and logistically viable for arts and cultural events to take place.

There are constructive proposals about the role of local authorities and measures to address insurance costs. There’s also a call to provide a “roadmap for arts investment”, with the objective of moving towards the EU average spend of 0.6 per cent of GDP on arts and culture, and the introduction of tax incentives for arts similar to the existing Section 481 scheme for film production. And the NCFA wants to see the country moving towards developing a universal basic income for all citizens. In most of these points, it cites examples of similar measures which have already been introduced by other EU countries during the crisis.

The 13 proposals are a canny mix of the practical and the aspirational. Some have been on the NCFA’s agenda for years. Importantly, with agreement on formation of a new government potentially imminent, it calls for a “full minister for culture” in the next cabinet.

How much of this is achievable? Cultural organisations and funding agencies should be able to make a strong case that the triage measures applied to much of the economy over the last three months will be required for longer in the arts than in most other sectors. The sums involved are small compared to the eye-watering amounts the State has already spent in keeping the economy on life support.

But there is a legitimate fear, based on past experience, that when it comes to crunch time in political negotiations and budgetary discussions, high-flown words about the importance of the arts are swiftly forgotten. It remains to be seen what configuration a new government, if one is formed, will take, and whether the current Department of Culture, Heritage and the Gaeltacht will survive. In that atmosphere of uncertainty, it falls to the Arts Council, under its new director Maureen Kennelly and recently appointed chair Kevin Rafter, to take a proactive role in defining the challenge and implementing the required solutions.