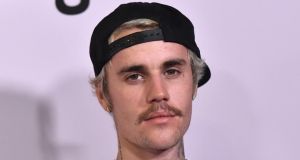 Canadian singer Justin Bieber has been allowing some fans to speak with him directly on a live Instragram stream. Photograph: Lisa O’Connor/AFP via Getty

An Irish teenager who got to speak to Justin Bieber via a live video stream on social media has said she is “still in shock”.

Transition year student Natasha Rolland (16), who is the daughter of former rugby international referee Alain Rolland, was watching the singer do a live stream on Instagram on Sunday night.

Users of the social media platform are able to request to join a live stream.

Natasha said she had been watching a lot of the singer’s live streams during quarantine and that he often accepts fans’ requests to join the stream, allowing them to speak to him.

“You can press request to join but there were 50,000 people in the live stream so I suppose lots of people were obviously requesting. I was very lucky that he just managed to accept my request,” Natasha told The Irish Times.

“It came up on my phone ‘you are going live with Justin Bieber in 5, 4, 3, 2’ and I just immediately went into shock. I froze and then he just popped up on my screen and said ‘what’s up’ and I was like ‘oh my god, is this real’.

“I was telling myself ‘be calm, be calm, be calm’ because if you freak out, he probably doesn’t want to listen to people screaming so I was just thinking be calm and talk to him.”

Natasha spoke to Bieber for just under five minutes and brought her mobile phone around her home so that her sister Amy, brother Mark and Dad could see.

Bieber asked the teenager had she been to any of his concerts and what her favourite song was from his 2015 album, Purpose. Natasha asked Bieber how his quarantine had been going to which the singer replied, “it’s been good, it’s been long but we’re making the best of it”.

“Once I got off the phone I just immediately dropped and screamed the house down,” Natasha said.

“There were floods of messages coming in and I had 800 follower requests on Instagram and people were DM-ing me that I didn’t know. It was just so overwhelming. I had loads of messages from my friends.

“I’m still in shock, I still can’t believe it. The one and only Justin Bieber, I had a conversation with him.”

Natasha, who has been to two of Bieber’s concerts in recent years, said she plans to try and get on another of Bieber’s live streams so that her older sister, Clodagh, who is a singer, gets to say hello this time.

“She [Clodagh] was on a walk and unfortunately missed out and was really upset,” Natasha added.

Mr Rolland said his daughter is a “mad fan” of Justin Bieber and that he initially thought it was a joke.

“She brought the phone to me and I thought she was spoofing. I had to go into my son then afterwards and found out it was actually for real,” he said.