Search for 2,020 people for community cast for Olympics-style opening spectacle 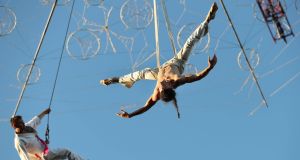 Members of the French performance company Gratte Ciel rehearse in Eyre Square, Galway ahead of their live performance at the launch of the Galway 2020 European Capital of Culture programme, Ireland. Photograph: Eamon Ward/PA

Galway 2020 European Capital of Culture, the largest and most complex cultural event held on the island of Ireland, will start on February 1st with a week of “fiery celebrations” in Co Galway towns and villages.

Events throughout the year will involve more than 1,900 events across 154 projects, 170 partnerships and collaborations with local, national, European and international artists and cultural organisations from more than 30 different countries.

The opening week will include a large public spectacle in Galway city on February 8th, produced by Water Works, a company which has created events for the Olympics, including London’s.

The opening will involve a community cast and creative director Helen Marriage said at the launch of the programme on Tuesday that they are looking for 2,020 people to take part.

The launch, by Minister for Culture, Heritage and the Gaeltacht, Josepha Madigan, Galway 2020 chairman Arthur Lappin and creative director Helen Marriage, follows more than 18 months of controversy, including funding problems and several high-profile departures last year, including of creative director, chairwoman and board members.

The programme will be based around the four fire seasons of Ireland’s ancient Celtic calendar: Imbloc, Bealtaine, Lughnasa and Samhain.

Events around themes of landscape, language and migration will thread through the year. It will include 30 projects celebrating the Irish language; 125 world premieres and 135 Irish premieres.

Migration, in terms of Irish history as well as European cultural diversity, will be explored against the backdrop of Galway, a city that Ms Marriage pointed out where 24 per cent of the population was born outside Ireland.

Josepha Madiga said it was “an exceptional opportunity to highlight to an international audience, not only the strength and vibrancy of Galway’s culture and creativity in all its many forms, but the importance of our place in Europe.”

The European Capital of Culture (ECOC) is a national designation and the initiative, which began in 1985. Galway won the Irish designation for 2020 in 2016.