Donegal: A place perfectly at ease with strangeness

A guardian of the Irish language and ritual, it’s often fiercely resistant to social change 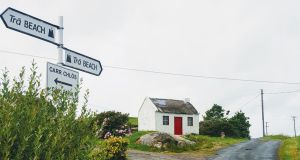 A Donegal landscape near Burtonport

You go up a mountain and down the other side, said Donegal-born poet Madge Herron, to find out who you are. For some, the writing of a poem begins with an emotion or an image. But much of my poetry springs from the wildness of the earth. I spend a lot of time with maps getting lost, climbing walls, standing in empty fields where some long-ago event happened. Often I am seeking out hidden histories, or trying to get a sense of how the physical site has survived the past.

Recently I spent a glorious day prowling around the northwest Donegal village of Ailt an Chorráin (or Burtonport) taking in the remote rock and heather landscape and gazing from different vantage points at the large two-story house which was once occupied by the Atlantis Foundation known locally as The Screamers. Today the house cuts an enigmatic shape against the harsh Atlantic coast. What brought this so-called “cult” of free-thinking radicals here? And what of their lives does this house remember?

Donegal is a mysterious county. A guardian of the Irish language and of ritual, it’s a place often fiercely resistant to social change. Yet, it remains perfectly at ease – perfectly at one – with strangeness. Translated from the Gaeilge, Dún na nGall means literally “Fort of the Foreigners” whilst a famed farewell point for US emigrants has earned the name of Droichead na nDeor or “the Bridge of Tears”.

Home to Altan, Brian Friel and the lauded school of Tory Island primitive art, the county is steeped in the song, poetry and voices of those who have known great sorrow and great wildness. I grew up in the bright-black heartlands of Cloich Cheann Fhaola, nourished by rough shorelines, rich folklore and mythologies, and the luminous shadowlight of Eargail moving glacially across the bogs. Donegal culture is one of beauty and loss, of language and silence, of isolation and community. And at the heart of Donegal living is a sacred connection of self to the earth which is why, year after year – despite all the challenges – poetry gets written, art gets made, imagination goes on.

For me, language and landscape are absolutely intertwined. Many of the poems in my debut collection Bloodroot (Doire Press, 2017) and in a later suite of poems titled Town (The Salvage Press, 2018) are drawn from the physicality of ruins, sites and monuments. When you live in rural Donegal, you live under the influence of the Atlantic, the Border, the secrets of the bog; you develop a sixth sense for what might be buried in darkness, for what came before you and will survive after.

Northwest writers have long explored these influences – which can be found too in the work of my peers among the “next generation” of Donegal visual artists, most notably artists like Celina Muldoon and Myrid Carten. Memory, and how it exists or not, is a subject I am obsessed by, and is beautifully rendered by Barcelona-born artist Maria Gasol, whose portrait project at Áras Gaoth Dobhair engaged older people living in with dementia.

It is also no surprise that Donegal has supplied RTÉ Raidió na Gaeltachta and TG4 with a stream of talented actors, presenters and performers including Irish Language Ambassador Caitlín Nic Aoidh and Pol Penrose aka Colm in the popular soap opera Ros na Rún who says that “the experience of being rooted in a place of such extreme beauty is very much central to how and why I use my voice as an actor”.

Donegal culture is thriving on the back of artistic practice and the vision of groups like North West Words, Eargail Arts Festival and Artlink. But perhaps one of the most worrying threats to art in the county arises out of growing environmental concerns. Most recently, multiple applications for aquaculture licences have been proposed at Ballyness Bay in Falcarragh to develop a shell-farming industry. Such plans will denigrate local ecology, eye-soring the area, preventing jobs and access for locals and rendering the mystery out of a much-loved beauty spot.

As a poet, these plans sadden me deeply. I associate Ballyness with long evening walks and the ways – both magical and unknowable – that the sea provokes stories, moments of human connection and art. The Falcarragh community is currently protesting against the applications (see saveballynessbay.com)

September 20th is Culture Night and according to Donegal County Council arts officer Traolach Ó Fionnáin, the county line-up looks to be one of the strongest in Ireland. We are blessed in Donegal, Ó Fionnáin says. We have a strong cultural sector, vibrant communities, a wonderful landscape in which to host events and a supportive local authority.

All these elements working in tandem make our national cultural events programme, which also includes Bealtaine Festival, Cruinniú na nÓg, Heritage Week, very impressive indeed. In fact Donegal is generally second only to the major urban centres of Dublin and Cork when it comes to the volume and range of events delivered.

Among the 2019 Culture Night events planed is an outdoor extravaganza at Letterkenny Town Park titled Cybertribe, which is a favourite every year. Featuring sculpture, performance and art installation inspired by comic book visions of the future and real-life cyber technologies, the event is presented by Inishowen Carnival with performances from Fusion Events, Zona Dance Aisling Dance Academy Ballybofey and In Your Space Circus.

As Donegal Culture Night 2019 Ambassador I’ll be in my home county to read poetry at the Letterkenny Courthouse from 7pm. The reading, titled Body, Voice & Sentence(s), will draw inspiration from the ancient relationship in Ireland between poetry and the law, exploring the landscape of Donegal that, even after all this time, remains as unfamiliar to me as it is familiar. I carry it with me always like an untold story that lives in the bones. Join us on Culture Night to celebrate the art, innovation and wild spirit that makes Donegal culture so special.

More information about Culture Night can be found at culturenight.ie
Annemarie Ní Churreáin is a poet and writer from Cloich Cheann Fhaola in Donegal. She is the current Commissioned Writer at Temple Bar Gallery and Studios, Dublin, and a 2019-20 Writer in Residence at Maynooth University, Kildare. Ní Churreáin is Donegal Culture Night 2019 Ambassador. More information about her work can be found at studiotwentyfive.com