‘Culture Night is not just quirky and great fun, it also led to my dreams coming true’ 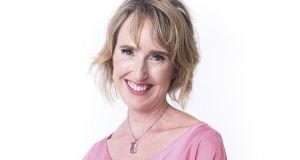 Megan Wynne’s debut children’s novel, The House on Hawthorn Road, will be published by the O’Brien Press on September 30th

To me, Culture Night usually means quirky theatre pieces, art exhibitions and, if I’m lucky, free food. So when my friend asked me to help her win a 15-minute slot to pitch her novel with the O’Brien Press on Culture Night, I thought I’d give it a go too. I’d been submitting my novels for 15 years with little luck. The world of publishing felt like a well-secured castle with the drawbridge firmly closed to me.

As Culture Night takes place on a Friday evening, I dressed up in a little black dress, heels and applied “Going Out” make-up. My expectations of anything coming from the event other than fun were non-existent. Nevertheless we arrived over an hour early for our appointments and spent that time in a local pub practising our spiels one last time with each other. I was pitching a YA novel, which I felt wasn’t quite ready but I thought the idea of it might win me a slot. Much to my delight it had and, at the pub, while my friend had ordered a pot of tea, I opted for a glass of Sauvignon Blanc. It was Friday night after all. Why shouldn’t I enjoy myself?

Half an hour later we rang the doorbell of the O’Brien Press and a smiling woman invited us in to take a seat. There were three or four seats on either side of a short hall. It soon became apparent that these weren’t nearly enough as eager writers kept ringing the doorbell ages in advance of their appointments. Those who weren’t due within the next 15 minutes were kindly asked to come back closer to the time.

It was while waiting in the hall that I noticed the mood was unlike that at any other Culture Night event I had attended. Everyone seemed to be taking the whole thing very seriously. People were wishing each other good luck when they were called, as if they were heading in for a Leaving Cert oral. One writer had brought along her sister for support. I felt a little confused. Surely none of them thought anything would actually come of this?

When it was my turn, I was guided upstairs to an office where I met two women. I sat down and they looked at me expectantly.

“Should I just start?” I asked.

Warmed by my glass of wine and in frivolous Culture Night mode, I launched into the details of my YA novel. The words flowed easily and I enjoyed having a captive audience, who asked insightful questions about my beloved characters. When I finished, they said, “We’d like to read it.”

“The opening chapters?” I asked.

“But it’s not really finished.”

“But I’m only at the fourth draft stage,” (I usually do about 20 before showing a novel to anybody) “and it needs to be proof read.”

“But…” I could think of no more excuses and any way why was I arguing with a publisher who was asking to see my work? After 15 years of submitting to publishers, literary agents and writing competitions, followed by months of waiting, usually to hear nothing back at all, here were two publishers insisting that they wanted to read my novel as soon as possible. They wouldn’t take no for an answer. I stumbled out of the building in shock.

I turned to her. “They want to read my novel.”

“Yes.” I was completely gobsmacked. I’d gone out for a bit of fun and ended up with a real live publishing house interested in my writing. It took me several days to get my head around it, after which I bundled the novel off to them.

Ten weeks later, the O’Brien Press agreed that the YA novel wasn’t ready. However, they were interested to know whether I’d written anything else. I told them about a children’s novel I’d written for my father four years earlier. I had written it for fun after my previous novels for adults had been rejected. My father had read the book and loved it, which was good enough for me. It had been sitting on my computer ever since. They said they liked the sound of a magical house in Dublin and children time travelling through its walls so, a few days before Christmas, I emailed them the whole book and didn’t give it another thought.

One morning in March, I noticed a missed call on my mobile from a Dublin number that I didn’t recognise. I presumed it was my health insurance company ringing about a renewal. I didn’t bother to reply until mid-afternoon when I had a few minutes to kill before an after-school creative writing class. I rang my voicemail to hear Kunak McGann from the O’Brien Press asking me to call her back. A couple of children were piling into the room. I waved them to their seats, saying I’d be with them in a moment. Telling myself it couldn’t possibly be good news – and she was probably kindly ringing to reject my book – I made the call to hear Kunak say, “Hello Megan. I’m sorry it’s taken us so long to get back to you but I’m ringing to let you know that it is unanimous. We love your children’s novel and we’d like to publish it in September 2019.”

The call lasted less than two minutes. What had begun as a fun evening out in Dublin had turned into the opportunity I’d been dreaming about for almost 15 years. Not only is Culture Night quirky and great fun, it had also led to my dreams coming true when I had given up all hope!

Megan Wynne’s debut children’s novel, The House on Hawthorn Road, will be published by the O’Brien Press on September 30th.