‘We limit ourselves. We’re told to behave in a certain way from birth’

Following on from her work on the stage and TV, Jessie Buckley now makes her big-screen debut in ‘Beast’ – a bow that is cause for great excitement in her native Co Kerry 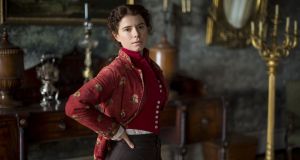 “Sure nobody ever recognises me,” says Jessie Buckley. “I’m always scurrying around London under a hat and looking like a homeless person.”

That is unlikely to remain the case. The cheerful, chatty, Kerry redhead is currently appearing in BBC’s big-budgeted adaption of Wilkie Collins’ novel The Woman in White and is shooting Judy, a biopic chronicling Judy Garland’s last days, starring Renee Zellweger.

“We’re in the middle of it all. I’m up at 5am every morning and back at 9 o’clock at night and I’m just getting through it day to day,” says Buckley. “But it’s still an amazing experience. I have such a girl-crush on Renee. She’s completely incredible. I’ve fallen massively in love with her.”

Next April, she’ll appear alongside Robert Downey Jr and a hugely starry ensemble in The Voyage of Doctor Doolittle. She can tell us that she’s one of the live action stars, but not much more.

“I think I’ll get in trouble if I say anything. But I got to hang out with Jim Broadbent. And we pretended to be clowns for a week. So that was great fun.”

Buckley makes an enduring impression as Moll, a complicated young woman, in Michael Pearce’s atmospheric British thriller, Beast. The much-admired drama sees the stifled Moll fall for Pascal (Johnny Flynn), a rabbit-hunting outsider who may or may not be a serial killer. More intriguingly, Moll, who is simultaneously delighted and outraged by her family’s disapproval of Pascal, may or may not want him to be a serial killer.

“From the moment I read the script I had a gut reaction to Moll,” says Buckley. “There were so many possibilities in the story and who this woman could potentially be. We limit ourselves. We’re told to act and behave in certain way from birth. And she’s having none of it. There’s a rebelliousness about Moll. She is questioning everything about what we are and can be as people. Even the scary, dark parts. So working on her character was constantly surprising.”

Beast was shot in Jersey, where writer-director Michael Pearce grew up. The insularity of the location adds to the ratcheting, Hitchcockian tensions of the drama.

“I grew up in Killarney so I’m used to a certain wildness but there’s a unique feeling about Jersey,” says Buckley. “Like the characters, it’s a kind of outcast of an island. There are disused German bunkers from the second World War. It has this mad elemental quality but it’s a tax haven so there’s a very conservative mind-set and Waitroses left, right and centre.”

Beast marks Buckley’s big-screen debut, a bow that is cause for great excitement in her native county.

“It’s a bit frightening,” she says. “My local cinema has fought really hard to get this on to the screen. I’ve never had anything in a cinema before. My God!”

Buckley first came to public attention as an 18-year-old with a big voice and bigger personality in I’d Do Anything, BBC’s 2008 search for a new talent to play Nancy in a London West End stage revival of Oliver. She was Andrew Lloyd Webber and Cameron Mackintosh’s favourite to win, but she finished in second place in the public vote. She stayed on in London, regardless, and soon landed a role in an off-West End revival of the Stephen Sondheim musical A Little Night Music.

“I can’t imagine my 17-year-old sister coming over here now,” says the 28-year-old. “I don’t know what was going on inside my head. I don’t regret it for a minute. At times it was tough. But I often learned a lot more from the trip-ups than the successes.  I did I’d Do Anything. And then a play and then A Little Light Music. I played jazz in a night club where nobody listened to me for two years. I sold cereal in a market for a while. I worked in a clothes shop in Brixton. But that’s the life of an actor. You never really know when your next job is coming.”

Buckley, the eldest of five children, was born and raised in Killarney. Her mother, Marina Cassidy, a harpist and vocal coach, encouraged Jessie to sing, and helped her toward achieving a grade eight in piano, clarinet and harp with the Royal Irish Academy of Music. Growing up in a harp-soundtracked household was not as tranquil as one might suppose.

“I lugged that harp up and down to Dublin on the train,” she says. “There was music in every room when I was growing up. It could get like a warzone. But that’s the great thing about a big family. There’s a bust-up and then you all put your arms around each other and watch a film or go for a walk. My parents worked bloody hard to give us experiences and to try different things. So we’ve all ended up doing completely different things.  My brother is a mountaineer. My sister is an engineer. My other sister is a nurse.”

A regular in school productions at Ursuline Secondary School, an all-girls convent school in Thurles, Co Tipperary, and a member of the Tipperary Millennium Orchestra, the high-achiever fell into a slump after failing to get into the Guildford School of Drama, and another after I’ll Do Anything.

“I was 17 and my heart was set on it,” she recalls. “I was going to study musical theatre and I thought that was going to be my life. But I always say what’s meant for you doesn’t pass you by, and if I had got in I might not have had the opportunities I have had. You learn as you go along that there are a lot of different visions involved in making something. You can sit down with the director and have the exact same sense for a character or you might disagree but be able talk it out. But sometimes it’s just not going to work out and you have to accept that and move on.”

Buckley has won fans with several prominent TV gigs, including the 2016 BBC adaptation of War and Peace, Peter Moffat’s historical drama The Last Post, and Taboo with Tom Hardy.

“Tom Hardy is such a good egg,” she gushes. “He’s a total teddy bear. He loves his dogs and his kids. He’s a true artist. But he’s a lovely, naughty, funny man.”

By now, Buckley has become accustomed to various nations trying to claim her. Having been selected by Screen International as one of its Stars of Tomorrow, this year she was shortlisted as a rising star by both IFTA and BAFTA.

“I’d have to be a miserable twit not to be delighted,” she says. “You just hope you’re doing good work and then you get recognised by IFTA and BAFTA. There’s no diplomacy required. I think it’s amazing. I’m thrilled.”

Level 5 lockdown TV: From The Crown to Dead Still, the ultimate guide to what to watch
6

In ár gcroíthe go Deo / In our hearts forever: an art project to honour lives lost to Covid-19
9