The Cured: Tom Vaughan-Lawlor and Ellen Page in an ingenious debut

Review: The film develops new flavours of creepiness amid the socio-political metaphor 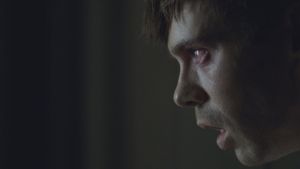 Sam Keeley in The Cured carries impressive weight of trauma through every scene.

It’s as well to have a sound variation in mind when reaching for the worn handle attached to the zombie genre. There’s barely an angle that hasn’t been worked.

David Freyne’s ingenious, sombre debut boasts just such a hook. Though The Cured loses its way a little in the final act, it offers delicious variations that facilitate new (if not exactly fresh) flavours of creepiness and great scope for socio-political metaphor.

It’s there in the title. Following an outbreak of flesh-eating caused by the evocatively named Maze virus, scientists devise a cure that allows recovering ghouls (George A Romero’s original description) a route back into worthwhile society. That route is not without its grim detours. The cured are haunted by memories of what they did. Not every citizen welcomes their return. The newly normal Senan (Sam Keeley) does, however, find a berth with his widowed sister-in-law Abbie (Ellen Page).

Elsewhere, Conor (Tom Vaughan-Lawlor), a former lawyer, also among the cured, finds his rehabilitation even less comfy as he edges towards insurrection. The relationships between the three principals drive the action and generate the sociological mulch.

Shot in and around a convincingly battered, appropriately damp Dublin, The Cured profits from first-class performances. Page is muffled by grief. Sam Keely, an Irish actor who’s been everywhere over the last decade, carries impressive weight of trauma through every scene. And, not for the first time, a charismatic, focused Tom Vaughan Lawlor who bosses the screen into compliance.

The Cured is not a puzzle. It does not have a solution. But the key to its meanings is tied up with Conor’s character. The film emerges following a period when refugees and asylum seekers have been victimised as the source of all society’s ills. Pocket demagogues ride such discontent to dangerous success. The Cured identifies its title characters as victims and, if so inclined, the audience can make their own connections with the wider world.

If anything, political analogies are a little too busy here. (There’s surely something being said about Northern Ireland too.) The core action gets a little swamped by import in the closing stages.

But this remains an original, thoughtful entertainment that is sure to propel its creator towards still greater things.