Helen Mirren on a motorbike? That’s a ‘grey pound’ movie

‘The Leisure Seeker’ is the latest undemanding, patronising film aimed at oldies 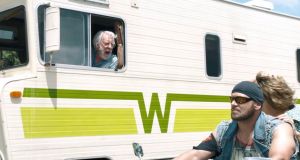 Donald Sutherland gets mad in ‘The Leisure Seeker’

This week, we can watch Donald Sutherland and Helen Mirren bicker their way from Massachusetts to Florida in The Leisure Seeker.

The generic “grey pound” movie has been around for a while. It’s over 30 years since Burt Lancaster and Kirk Douglas (still available for a sequel at 101) teamed up for the fitful Tough Guys. But the movement didn’t really get going until the current century.

Blame The Best Exotic Marigold Hotel. John Madden’s tale of British retirees in India was not the worst film released that year – or even that month – but few movements have been launched by more modest entertainments.

Make sure one of the oldies (preferably Smith) swears vigorously and that another (Dench will do) rides a motorbike or dances to Beyoncé. “Oh, this ‘Bouncy’ is rather good. Isn’t she?” Maureen Lipman says in my imaginary grey pound romp.

There should be some reference to the dying of the light, but not enough to distract from the hilarious vista of Nighy slumping drunkenly into his daal.

The Best Exotic Marigold Hotel took $136 million on a very modest budget. It didn’t open hugely, but older viewers aren’t so desperate to see a movie in the first few days. Such films accumulate their haul over long steady weeks. Exhibitors will pull Super-Whatsit the minute sales begin to sag. The latest Dench-Smith can tick over steadily for months.

The British and American film industries quickly copped on to the potential and brought together any number of well-loved stars for any number of ho-hum movies.

Mirren mooned at Om Puri in the not-terrible The Hundred Foot Journey. Emma Thompson skipped a generation to moon at Dustin Hoffman in Last Chance Henry. Joan Collins and Pauline Collins – very different near contemporaries – travelled to France in the lazily titled The Time of Our Lives. There are dozens more.

To be fair, The Leisure Seeker does add a bit more roughage to the geriatric slop. Sutherland’s character is in the later stages of dementia. Mirren’s is in the advanced stages of cancer.

But the film still treats its older characters as cute puppets. Mirren really does get to ride on a motorbike. Sutherland’s condition is exploited for comic effect. The film-makers and the actors are more interested in representing the concept of agedness than fleshing out personality.

The ne plus ultra of the genre is The Expendables series. It didn’t matter that there was no plot to speak of. Stallone, Schwarzenegger, Rourke, Willis, Lundgren, Snipes and the rest were there to assure an older demographic that the 1980s would last forever.

It’s important to clarify that not every film starring the actors above is a lazy grey-pound bottom-feeder. Tom Courtenay and Charlotte Rampling helped elevate the recent 45 Years into a contemporary classic.

Now easing into her seventh decade, Isabelle Huppert is doing the best work of her rich career in such films as Elle and Things to Come. Dench and Smith still find time for good, populist work like Philomena and The Lady in the Van.

In one sense, the news is good. It is hard for actors of any age to find decent roles that stretch their abilities. But established older actors now have a better chance of scoring major roles in commercial pictures than their golden-age contemporaries ever managed.

Long before they had reached Dench’s age, stars such as Joan Crawford and Bette Davis were reduced to cheap horror and supporting roles on telly. (Neither had reached 60 when they made What Ever Happened to Baby Jane?) Only a jerk would begrudge the senior stars their moment singing Let it Go on a scooter or robbing a jewellery store dressed as Santa.

We’re all allowed our vacuous rubbish. It just adds sauce to the more nourishing fare.