Joker, Spider-Man, Aquaman and the horror film Midsommar feature in complaints to Ifco 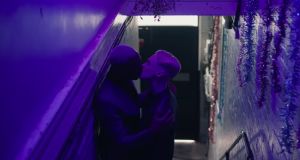 Moments in Between: H&M’s cinema ad from Christmas last year

Late last year a complaint landed at the Irish Film Classification Office, or Ifco, after the correspondents had brought their children to see Star Wars: The Rise of Skywalker, in Galway.

“We were taken aback at one of the adverts for H&M where two different fat couples kiss. While I believe of course in equal rights for any couple, when a movie is rated 12A you don’t expect to see such an advertisement before a 12a rated movie,” read the complaint.

The director of film classification, Ger Connolly, was puzzled. “I would be grateful if you could be more specific about why you are taken aback,” he replied. “The comment only mentions two fat couples kissing.”

Just noticed on my autocorrect... fat was incorrect. Ad was a gay couple kissing quite passionately

“Just noticed on my autocorrect... fat was incorrect,” the clarification read. “Ad was a gay couple kissing quite passionately.”

“Sexual orientation is not a classification issue and the scene as portrayed would not have a bearing on age classification awarded,” Connolly replied.

In the UK last year, according to the British Board of Film Classification, Joker, the Oscar-winning movie starring Joaquin Phoenix, was the most complained-about film, with 20 written objections. The total number of complaints about it to Ifco was so low that no worthwhile comparison can be made.

Connolly says his office has received only 23 objections about any films since January of 2019, and few reached the incandescent outrage that early censors, as they then were, had to endure.

“In almost all cases the complaints are reasoned and the correspondent has a genuine concern. It is also worth mentioning that all such feedback, positive or negative, is very welcome and does aid us in gauging public confidence in the classification system.”

The recurring theme of the complaints is, to quote Mrs Lovejoy in The Simpsons, “Won’t somebody please think of the children?” About half of the complaints address the supposedly upsetting effect of movies on the correspondents’ – or somebody else’s – children. Films deemed to have insufficiently stringent certificates included Instant Family, Spider-Man: Into the Spider-Verse and The Kid Who Would be King.

Several demonstrated an uncertain grasp of how classification works. One correspondent was outraged that “a guy” had brought “two children who looked about five years old” to the DC-superhero movie Aquaman, which had a 12A certificate. The correspondent complained to the staff, who – reasonably, one might argue – pointed out that children under 12 are allowed in with adult supervision. “I see that’s wrong and it means OVER 12 must have an adult,” the complainant bafflingly claimed. Connolly confirmed that the certification allowed under-12s to attend with a grown-up but agreed that he did “not believe that a 12A film is suitable for a five-year-old”.

A more general complaint arrived in February of 2019. “Why are Irish children aloud [sic] to watch movies, ie 15A, that children in the United States are not allowed to watch. Are we as a country heading towards a US mentally [sic] where children can watch anything so long as they have an adult with them.”

Connolly pointed out that, unlike the US or the United Kingdom, Ireland has a 16 certificate that prohibits anyone under that age from entering. He might have added that films such as this year’s The Hunt, granted a restrictive 18 here, are, under semi-equivalent 17 certs, open to all accompanied children in the US.

There was also misunderstanding about trailers. One complaint noted that trailers for a “16s film” were shown before a 12A film. Connolly replied that trailers are each assessed on their individual content and that the classification of the movie advertised is not a concern.

The films that generated the Lovejoy response may surprise some filmgoers. The violence in Spider-Man: Into the Spider-Verse, winner of the Academy Award for best animated feature – granted a PG certificate here – was “sustained and far too graphic for such young eyes”, wrote the parent of a four- and five-year-old.

Another parent, outraged on their children’s behalf, by the juvenile Arthurian fantasy The Kid Who Would Be King, left the film after 25 minutes and asked a staff member whether it got “any more scary”. Told that it did, he brought his children to another screen. “My 10 year old thanked me for moving into a new film,” the correspondent said.

Complaints about allegedly overly lenient certificates were also put the way of the horror film Midsommar and – watched on DVD two years after release – the Oscar best-picture winner The Shape of Water. The correspondent was happy they had not watched that last film with “my niece (let alone my mother!)”.

As in the UK, a smattering of complaints arrived about the classification for Joker, despite the fact that the film got a more restrictive cert in Ireland, a 16, than it did in Britain, where it carried a 15 cert.

In “none of our business” news, one correspondent wondered if the office had a view about the screening of the anti-abortion film Unplanned. Connolly pointed out that this was an issue for distributors and cinema proprietors.

Poring over the complaints in too much detail risks giving the impression that Ifco is deluged with objections. What is notable is the relatively small number of correspondents and the comparative civility of their tone. Indeed, one email seemed to be gently complaining that a certificate was too restrictive. “I am wondering why certain movies which are given a 16 cert like the recent It movie and The Hustle are given a 15 cert in the UK,” the writer pondered.

Only one email deserved its own 16 cert. “When you say in the guidelines of 15 video and 16 theatres that strong language is permitted, are you saying that there are no restrictions in the use of frequency of words like f**k, motherf**ker and c**ksucker? Strong language also includes the word c**t?”

Those are our asterisks.