Olivia de Havilland: From Gone with the Wind to Captain Blood – her 10 greatest performances

She began as an avatar of soft-focus integrity, then began to deal in more nuanced attitude 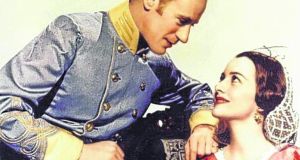 Olivia de Havilland and Leslie Howard on the set of Gone with the Wind. Photograph: MGM Pictures/Sunset Boulevard/Corbis/Getty Images)

In the current era, Hollywood might have treasured Olivia de Havilland late into middle age. Nobody drags Helen Mirren or Meryl Streep away from the prestige pictures these days. But the last surviving star of Hollywood’s golden age, who died on Saturday in Paris aged 104, didn’t get what she deserved in the 1960s and 1970s – and onwards. No matter. Her career in the first three decades showed little slackening of quality. She began as an avatar of soft-focus integrity and went on to deal in more nuanced attitude. The generation of Bette Davis, Joan Crawford and Ingrid Bergman has finally passed.

A MIDSUMMER NIGHT’S DREAM
Max Reinhardt,William Dieterle, 1935
Just imagine. De Havilland began her film career working with Reinhardt, a legendary figure in turn-of-the century middle-European theatre, on his magical version of Shakespeare’s most hallucinatory comedy. Jimmy Cagney is Bottom. Joe E Brown is Flute. An impossibly young de Havilland is Hermia. So, so, so long ago.

A genuine star-making vehicle that showed Hollywood at its most unashamedly entertaining. Neither Errol Flynn nor de Havilland had yet established themselves. They would be unstoppable after their turns as, respectively, Irish rogue and (historical license ahoy) the noble woman who purchases him as a slave. Still the model for all swashbucklers to come.

THE ADVENTURES OF ROBIN HOOD
Michael Curtiz, 1935
Curtiz, Flynn, de Havilland and Basil Rathbone reunited for what proved to be the most expensive film Warner Brothers had yet made. It’s all up there on the screen. Flynn is, of course, Robin and Olivia is his perky Maid Marian. Erich Wolfgang Korngold’s score is epic. The Technicolor is groundbreaking. De Havilland is enchanting as the only woman who can tame the outlaw.

A life in pictures View Now

GONE WITH THE WIND
Victor Fleming, 1939

Every female actor in Hollywood wanted the role of Scarlett O’Hara, but de Havilland was perfectly happy to play the sensitive, less assertive Melanie. Few other contemporaries could have made something so interesting of a character so relentlessly virtuous. It was part of de Havilland’s genius that she relished working with the less fiery characters. Still the highest grossing film ever, after adjustments for inflation.

THE STRAWBERRY BLONDE
Raoul Walsh, 1941
De Havilland was given plenty of light moments in her great films, but she was rarely set loose in a top-flight comedy. Walsh’s delightful period romp was the closest she came. Not for the last time de Havilland was cast as the less flashy option for the romantic lead. Jimmy Cagney falls for the glamorous Rita Hayworth, but ends up with more reliable Olivia. An array of cracking songs accompany the stars as they come to a workable arrangement.

TO EACH HIS OWN
Mitchell Leisen, 1946
Revenge is sweet. During the war, de Havilland bravely sued Warner Bros for its overzealous enforcement of labour contracts. She won, but many felt the case would do for her career. She returned with this challenging film about a women coping after having a child out of wedlock. She won the best actress Oscar. Among those she beat was Celia Johnson for Brief Encounter.

THE SNAKE PIT
Anatole Litvak, 1948
Still faintly shocking drama – from a semi-autobiographical novel – about the horrors of mental health care in the contemporaneous United States. De Havilland is wracked as a young woman who finds herself in an institution and can’t remember how she got there. The studio claimed that the film led to reform in mental institutions throughout the country. De Havilland’s despair is painfully convincing.

THE HEIRESS
William Wyler, 1949
De Havilland’s was perfectly cast as the misused woman – passion mostly internalised – in the best film adaptation of Henry James’s Washington Square (via an indestructible play). The contrast between de Havilland’s studied approach and, as her untrustworthy suitor, a method-heavy Montgomery Clift, is perfectly judged. De Havilland went on to win her second Oscar.

MY COUSIN RACHEL
Henry Koster, 1952
Olivia’s sister Joan Fontaine, with whom she had a famous rivalry, triumphed in an acclaimed adaptation of Daphne du Maurier’s Rebecca. De Havilland’s performance in another of du Maurier stories was not quite so celebrated, but she ate up the part of the titular character who may or not be a femme fatale. Notable as the first US outing for Richard Burton, the picture brims with overheated angst.

HUSH…HUSH, SWEET CHARLOTTE
Robert Aldrich, 1964
Following up What Ever Happened to Baby Jane?, Aldrich decided to reprise the successful relationship between Bette Davis and Joan Crawford, but the latter dropped out after shooting began. Though a very different actor, de Havilland proved a gallant replacement in this tale of cousins scowling amid southern gothic. Other veterans making an appearance include Agnes Moorehead and Mary Astor.