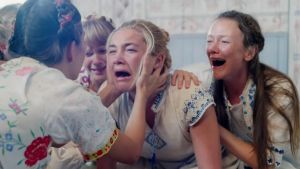 Dani (Florence Pugh) is already struggling with a seriously ill bipolar sister and her indifferent boyfriend, Christian (Jack Reynor), when a horrifying murder-suicide claims the lives of her entire family.

Christian, who had been hoping to break up with her, and is therefore feeling guilty, reluctantly invites Dani to join him and his friends Josh (William Jackson Harper) and Mark (Will Poulter) on a trip to the Swedish commune where Pelle (Vilhelm Blomgren), another chum, was raised.

When they get to the remote northern location of Hälsingland (actually, the Hungarian countryside) – where, in keeping with the title and the geography, the sun never sets – the friends are given hallucinogens and asked to take part in a nine-day ritual held once every 90 years. Fans of The Wicker Man or, indeed, any folk horror will know that no good can come of this sojourn.

Following on from last year’s nerve-shredding Hereditary, Ari Aster’s remarkable second feature confirms him as the most fascinating genre auteur around. In common with its predecessor, Midsommar is rooted in the sobbing, shrieking, Bergmanesque horrors of grief. Despite this obvious overlap, and a tremendous central performance from Florence Pugh, his trippy new film lacks the immediate emotional clout and register of Hereditary.

Instead we get a simmering stand-off between toxic masculinity and a sinister friend-zoner. Christian, as gamely essayed by the Irish actor Jack Reynor, isn’t a bad person; he’s a bad boyfriend: physically neglectful, unaffectionate, ignorant of birthdays and anniversaries; and resentful of the emotional labour of being in a relationship. Crucially, he’s the kind of guy who books a lengthy holiday with the boys and “forgets” to tell his mourning girlfriend. (Will Poulter’s laddish sidekick acts as a toxic Greek chorus.)

The dying romance, like everything else in the film, is unpicked by sly humour and backed by the most elaborate world-building since Shane Carruth’s Upstream Colour. This is horror-comedy but not as we know it. It’s sex and death and flower headbands.

There’s nothing like a conventional jump scare. The corpses are playfully, darkly presented. Recurring images of bears build towards a pleasingly wicked denouement. Slow-burning escalation and the thundering atmospherics, as powered along by Bobby Krlic’s eerie score, ensure the film’s length goes unnoticed. There’s a game of rune bingo that might have thrilled Shirley Jackson and a ritualistic deflowering that would have shocked Ken Russell. Pawel Pogorzelski’s blazing, hypnotic cinematography is an unsettling brightness from which there can be no escape or place to hide.

The Vast of Night: Ingenious sci-fi on a microbudget
Real news has value SUBSCRIBE