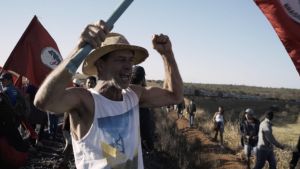 A grandmother stares out her window, dreaming of a farm where she can grow heart of palm and roses for rose oil.Camila Freitas’s Brazilian documentary examines the struggles of the region’s Landless Workers’ Movement (Movimento dos Trabalhadores Rurais Sem Terra), a Marxist, grassroots coalition of peasants and workers striving for land reform.

Shot over four years, Landless chronicles everyday life among the 600 families who occupy 15 hectares of unused property owned by an indebted sugarcane plant. They are a disparate group of dispossessed farmers, enthusiastic ecologists, and at least one manicurist. Some attend revival tents to praise Jesus and sing “Hallelujah in the judiciary system”; others take to the streets to chant: “Without feminism there is no socialism.”

On the other side of the dispute are a group of wealthy landowners who control more of the Brazilian economy - including Agrobrazi, featured here as a sleek, corporate TV commercial - than at any point in its history. A young girl notes that companies like Bayer made the poisons that ruin land and health, then manufacture the drugs to treat the poisoning. Counter-protesters come together under the banner: “Protect our patrimony.”

Soil farmed in ecologically-viable fashion, without pesticides or genetically modified organisms, is as important to the occupiers as the demand that it be redistributed. Their resistance, a marriage of agricultural work and political activism, brings them to the court for a complex legal dispute. (The movement contends that it is legally justified in occupying unproductive land, pointing to the 1988 constitution of Brazil, which states that land should fulfill a social function.)

The minutiae - the conversations about phone use, the blocking of a train line on a large estate belonging to the minister for agriculture (resulting in wildly inaccurate TV reports) – is precisely the point. Landless captures the stamina required for genuine political change.

“Isn’t there a holiday one of these days?” asks one of the occupiers, knowing the answer.

Landless is on Mubi from July 21st