Star Wars: The Rise Of Skywalker review. It’s unworthy of the word ‘cinema’

This isn’t a proper film – just a nondescript, boring component in the Star Wars machine

The final trailer for Star Wars: The Rise of Skywalker 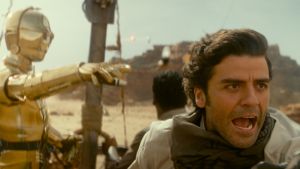 Anthony Daniels as C-3PO, John Boyega as Finn and Oscar Isaac as Poe Dameron in STAR WARS: THE RISE OF SKYWALKER

Time to face the truth about your sister’s awful husband. You know you’ve been defending him only because your even more ghastly parents can’t stand the air he breathes.

Lunatics in MAGA hats took endless digs at The Last Jedi, the previous film in the Star Wars cycle, for supposedly bowing down to the Woke Ascendency. There were women in it. Luke wasn’t sufficiently badass. Those sorts of things. Only a total cad would, thus, decline the opportunity to offer some support.

Let’s stop kidding ourselves. Though significantly less bad than George Lucas’s millennial prequels, the current trilogy struggles — hello, Martin Scorsese — to satisfy any worthwhile definition of “cinema”. No amount of furious end-tidying in Episode IX can conceal that reality. The film is merely a component part of a larger machine (the trilogy) that plugs into an even larger mechanism (the Star Wars universe). It has no more use or appeal when examined in isolation than would a sparkplug or a distributor cap.

The Last Jedi left JJ Abrams with so many dangling ends that the succeeding film was always going to seem like a patch-up job. Good luck remembering the state of relations between plucky Rey, tough Poe and sensitive Finn

To be fair, The Last Jedi left JJ Abrams with so many dangling ends that the succeeding film was always going to seem like a patch-up job. Good luck remembering the state of relations between plucky Rey (Daisy Ridley), tough Poe (Oscar Isaac) and sensitive Finn (John Boyega).

We begin with a furious collection of narrative bits that struggle to form a cohesive pattern. It’s as if Abrams opened the door on a room full of squabbling chickens and, rather than making any effort to calm them down, closed it again and let them sort it out for themselves.

After a great deal of speed, but very little pace, The Rise of Skywalker eventually settles down into a boring quest for a magical tetrahedron that does something or other. Rey and her team make for a colourful planet that seems modelled on the Burning Man festival and then another that, seasonally enough, looks to be leaning towards A Christmas Carol.

The tetrahedron (that does something) is, we hardly need to say, of no more significance than any bag of diamonds in a Hitchcock film. The Rise of Skywalker is here to answer questions that have been hanging around since The Force Awakens debuted in 2015. Who are Rey’s parents? Who will end up running the universe? Who will marry whom?

Some reach conclusions. Some do not. The most significant answers are blurted out mid-film with little effort made to prepare or to dramatise. It’s as if some passer-by yelled “Rosebud? Oh yeah. It was a sledge” halfway through Citizen Kane.

Some of the returning deadies are ghosts, but not all. Look, he’s alive. Look, she’s above ground again. By the close one half-expects to see Bambi’s mother return

Jeopardy is dispelled by the awareness that nobody is ever really dead in this universe. Ian McDiarmid is back as the Emperor. Mark Hamill is back as Luke. Carrie Fisher, actually dead in real life, is back to mutter self-help aphorisms blankly as General Leia Organa.

Some of the returning deadies are ghosts, but not all. Look, he’s alive. Look, she’s above ground again. By the close one half-expects to see Bambi’s mother return.

This wouldn’t be happening if the writers allowed themselves to escape from the pressures of “fan service” and tell a simple story worth hearing. The brief nods are, to be fair, fun for Star Wars veterans. Blink and you’ll miss a British actor who had smallish roles in the opening trilogy.

There is, towards the close, a satisfactory salute from controversial plush characters. Domestic fans of Star Wars Island (formerly Skellig Michael) will not be disappointed.

The endless attempts to address political and familial questions become, however, so exhausting that it proves hard to care which Skywalker will rise. It’s not clear how funny Domhnall Gleeson and Richard E Grant, apparatchiks of Empire, are supposed to be, but Domhnall does, at least, deliver the best line in the movie with some gusto.

Poe and Finn get only nano-smidgeons of character development. At least one likable character from the previous film is tidied away into insulting subservience.

Yet the component will just about fit in the prepared slot. Star Wars was modelled on John Ford’s The Searchers and Akira Kurosawa’s Hidden Fortress. The current “content” has more in common with the last update of your PC’s operating system. Have fun watching the grey bar complete itself.

Joe Dante: You have to give a movie time to age, like wine
7